Dissent and protest around Waitangi Day commemorations shouldn't been seen as a sign of failure, Prime Minister Jacinda Ardern says. 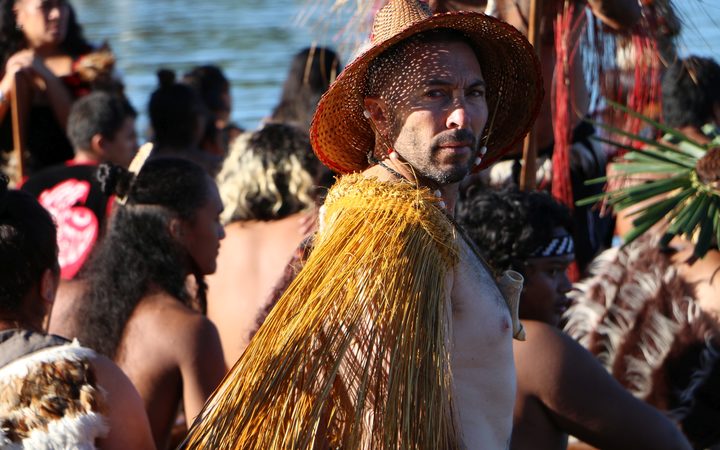 Waitangi Day got off to a peaceful start in the Bay of Islands, with an estimated 1500 people attending the traditional prayer service on the Treaty Grounds.

The turnout is thought to be the biggest in decades.

At the dawn service Ms Ardern gave a reading based on extracts from the Book of Celtic Wisdom by John Donahue.

She asked that those gathered never lose sight of why they had come to Waitangi today and that they might know the wisdom of deep listening.

Ngāpuhi leader Sonny Tau said New Zealand had a good run under the National Party for the last nine years, but acknowledged the nation might benefit from a young leader.

Ms Ardern said it had been an incredibly moving few days for her in the Far North. 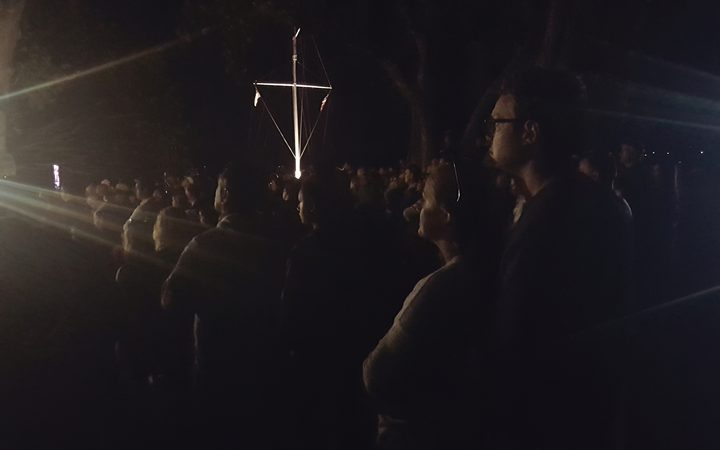 She said while the atmosphere at Waitangi this year had been more positive and peaceful than in recent years, she did not think people should shy away from challenging the government.

"I think we should stop striving for perfection at the commemorations of our national day. If people choose to use their voice on this day that does not mean it is a failure, it does not mean the day needs to change or move it just means that we're not complacent."

She said her first visit to Waitangi as Prime Minister had exceeded her expectations.

"Of course I was hopeful that everything would go to plan from Ngāpuhi perspective. I know that we make it challenging for them because politicians are often targets so it's not always easy even if you go in with the ambition of it being a particular way." 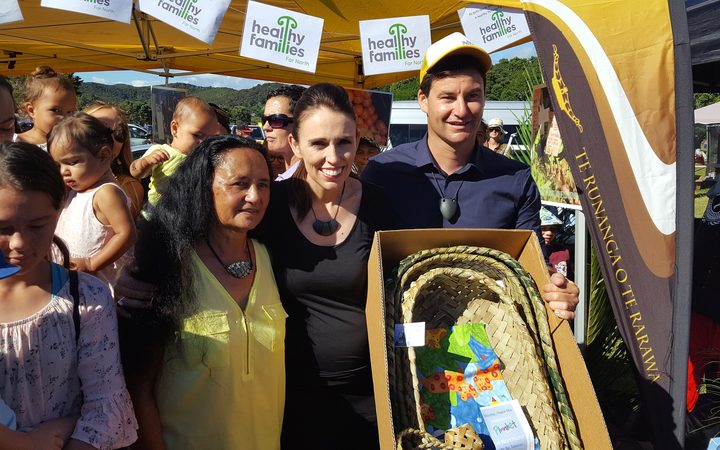 A group of women at Waitangi, who weave wahakura, have gifted the Prime Minister three of the woven flax bassinets in three sizes.

Jacinda Ardern said she will use them for her baby.

The Prime Minister then hosted a BBQ for the public at the nearby waka shelter.

Ms Ardern, who was on sausage and bacon duty, said they catered for 400 people but were running out of food within half an hour.

In a brief speech to the crowd she said she had been told previous prime minister's held a breakfast at a local hotel, but she opted instead to do something for the public.

Ms Ardern will spend some time at the Waitangi festival before returning to Auckland.

Around mid-morning a small group of protestors led by Waitangi elder Kingi Taurua marched through the congregation assembled for this morning's church service chanting "Hikoi", before moving on.

Hundreds of people gathered to catch a glimpse of a flotilla of waka launched later this morning.

Down the hill from the Waitangi Treaty Grounds the waka left the shore and began their annual journey to Te Tii Marae. 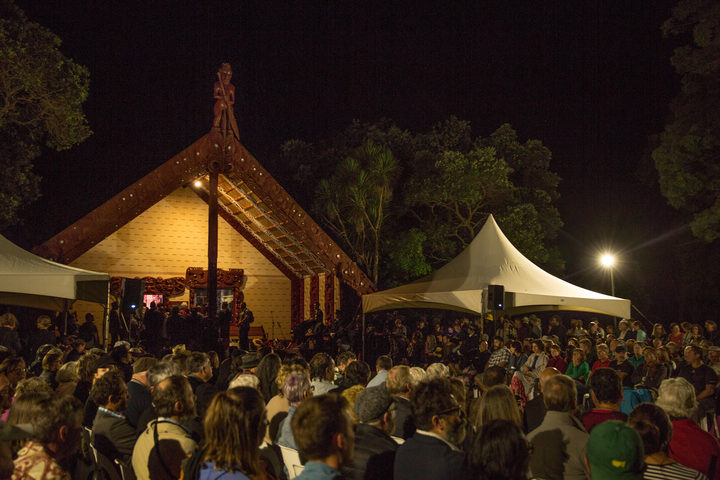 Last year, when he was prime minister, he opted not to go to Waitangi, saying there was too much disorganisation and disruption at Te Tii Marae.

But this year all of the events have been shifted to the marae on the Treaty Grounds.

Mr English said that decision, made by the Waitangi National Trust board, appeared to have been a good one.

"It's been great to see the dignity restored to that event where people have been able to enjoy the Waitangi Day significance for New Zealand rather than have to put up with what used to happen in the run up to it." 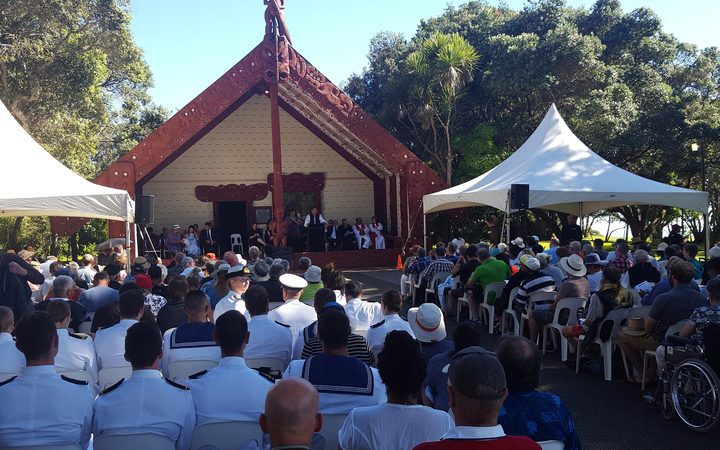 Celebrations all around the country

Ngāti Whātua Ōrākei hosted a big event at Okahu Bay with hundreds of people turning out for the food, entertainment and Māoritanga.

One of those attending said it was a good day spend with family and to get together to celebrate a good day for the whole country. 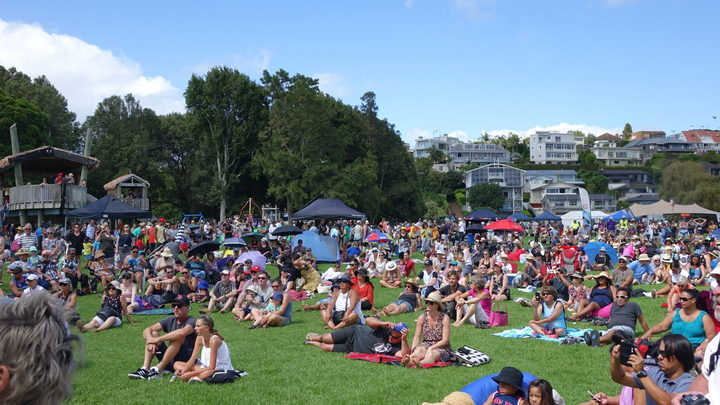 There were also whānau friendly events at Hoani Waititi Marae in west Auckland and at Hayman Park in Manukau.

He said New Zealanders want to come together and connect with the land, the sea and each other in order to flourish.

In the capital, the national day was marked with kapa haka and live music at Waitangi Park, with plenty of Wellingtonians tucking into kai from a hāngi.

Come on down to Waitangi Park this afternoon. There's a great line up of performances including Alien Weaponry & Salmonella Dub Soundsystem as well as food trucks serving delicious kai! pic.twitter.com/0D11SQQyVw

There is also a festival at the Porirua Harbour waterfront where 100 paddlers and their waka were out on the water taking people for tours, the event also had different cultural performances and music.

While in the South Island, events are also being held at Okains Bay Marae in Christchurch and in Nelson at Whakatū Marae and Founders Park.