Māori tattoos being sold in a Halloween store in America have led to renewed calls for laws to stop businesses from misusing Māori designs. 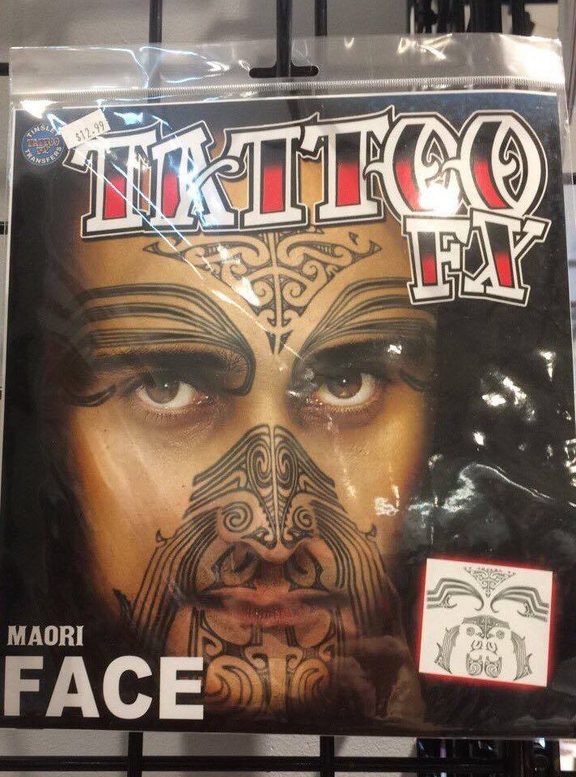 The temporary full facial moko is on sale in Chicago. Photo: Supplied

The temporary full facial moko, which have the label Māori face on the packet, are made by Tinsley Transfers and are being sold by Halloween Hallway in Chicago.

Sam from Hamilton, who is currently living in Chicago, said he was shocked to see the tattoos being sold.

"That's why I took a photo of it because I thought, 'Is this okay?'"

Sam did not think customers buying the tattoo would understand its cultural significance and he did not think it was appropriate to wear it for Halloween.

Maui Solomon, a lawyer specialising in cultural and intellectual property rights, said the tattoos were a "cultural rip-off".

"The fact that it's identified as a Māori face and is being sold as a Halloween mask which is designed to scare children in North America, I suggest is culturally offensive and misrepresents the true nature of tā moko," he said.

Mr Solomon said tā moko were an expression of pride and represented whakapapa.

He said he had seen increasing examples of Māori designs being misused and he hoped the new Labour-led government would make it a priority to protect them.

Mr Solomon wants the recommendations made to the previous National government by the Waitangi Tribunal in the 2011 Ko Aotearoa Tēnei report, to be taken on.

The report looked at reforms to laws and policies affecting Māori culture and suggested that a commission should be established to protect Māori cultural works against offensive and unauthorised commercial uses.

"Māori culture is a point of difference for New Zealand and a point of pride," said Mr Solomon.

"The more that it's devalued and discredited internationally, I think [that it] reflects badly on New Zealand's character and identity around the world."

The Minister for Māori Development, Nanaia Mahuta, said she would be looking into the advice made to the former government around cultural appropriation.

She said no business should be able to use Māori works without proper authorisation and authentication of the designer, regardless of where they were based.

"Cultural misappropriation has happened a few times with the use Māori designs," she said.

"It's clear that ... providing protection and greater guidance around the way designs may or may not be used is required."