Former Māori All Black Fred Graham, 88, has celebrated yet another milestone, winning the supreme award at this year's Te Waka Toi Awards. 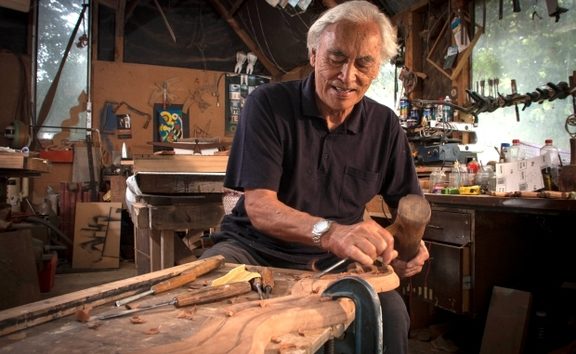 Mr Graham's work spans five decades and his art, which explores contemporary Māori issues, is displayed in prominent spaces around the country, including the High Court in Auckland and the National Archives Building in Wellington.

"I enjoyed the moment, it feels good. But it's the old story - today's headline and tomorrow's fish 'n' chip wrappers."

While his artistic talent came from his father's side of the family, it was never his intention to become an artist.

"In those days, you'd get the old 'okay son, cut your hair, what are you gonna do for a living'.

"Back in the 40s it was all about rugby and sport. It wasn't recommended that you should take up art as a career."

But Mr Graham did anyway, and went to teachers' college, where he was offered a third-year specialisation in art.

He became a key figure in the Māori contemporary art movement alongside other champion artists including Muru Walters and Selwyn Wilson.

"In the 40s, just after the war, Māori art was traditional art - carving and that kind of thing.

"But for the first time a lot of Māori had gone to teachers' college and the ideas around that time were changing. As young students, we wanted to follow our own path rather than follow the traditional path."

His love for art and photography first grew at Taita College in Lower Hutt, but he said the low-decile school made it difficult for him to access the resources and materials he needed to become the photographer he always dreamed of.

"There weren't many options growing up in my neighbourhood for young people to follow their dreams unless they wanted to become a sports star.

"Everyone around me was getting into the wrong things, and that wasn't me. I was the first one that I know out of my whole community and in my whole school to go to university at Massey."

He said art was about survival - it kept him alive and allowed him to express the views of people from his community to the world.

"That drive is really big because my art is more than just me - I carry a lot of people with me. It just so happened that photography was the tool that got me there.

"Having a fight in you is greater than anything. I can have talent but that only goes so far - that drive is everything."

Mr Graham has some advice for young emerging Māori artists like Chevron.

"You just follow your heart, you keep on going, you're going to get a few knocks but really - you have to follow your dreams."

Mr Graham said he did not plan on giving up art anytime soon.

"I think growing old happily is using your brain constantly rather than sitting round watching TV. I think as long as your brain is occupied - that's the secret of growing old."

Mr Graham's work has been recognised internationally with displays at the Burke Museum in Seattle, Washington and Port Alberni in British Columbia, where he carved 'Eagle with a Salmon' as part of the International Carvers Exchange in 1986.