Tributes are flowing for New Zealand broadcaster Marama Martin, who is being remembered as a "wahine toa" and luminary of her industry. 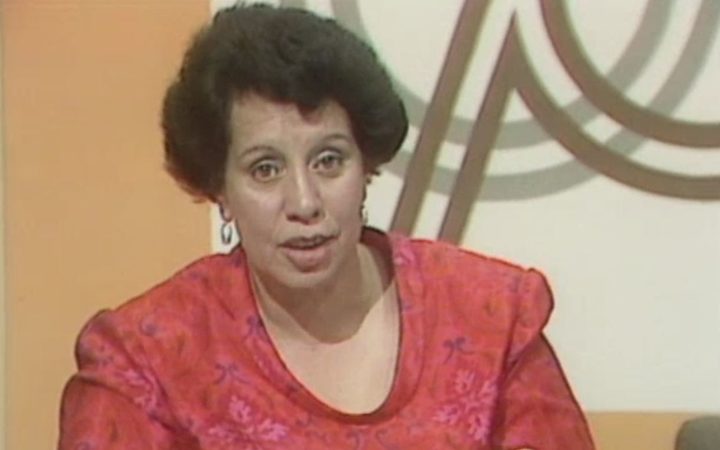 Mrs Martin, who was born in New Plymouth, died this week in Nelson.

She was one of the most familiar faces on New Zealand television in the 1960s and 1970s, announcing programmes and reading the weather.

In 1973, she became the first person to appear in colour on New Zealand television - wearing a mauve dress, which she had reportedly made herself.

Māori journalist Derek Fox, who worked with Mrs Martin around that time, said she was an iconic figure in broadcasting and a much-loved woman.

"She never had an ill word for anyone and I never heard an ill word about her," he told RNZ's Sunday Morning.

Mr Fox said Mrs Martin had a voice that was warm and gentle and came across on television as everyone's favourite auntie.

"That was her, that warm, friendly, smiling person was Marama... She was just lovely. When you saw her on television, that's exactly the way she was."

At the time, there were very few people working in broadcasting who were Māori, and Mrs Martin always had time to help advise him when he was starting out, he said.

She was an inspiration to many, he said - particularly young Māori women who could see her in a high-profile job and believe they could also do what she was doing.

"She was wonderful, she was a colleague and a good friend as well for me. I started in about 1970, and Marama was the one to go to if I needed to ask her about - anything, really.

"She was wise, she was gentle, but she wasn't that gentle. She had some pretty strong views about certain things, which was fantastic."

Other New Zealanders have also paid tribute to the "wahine toa", describing her on social media as a "great gift" to the country and its people, a "class act" and one of the voices of their childhoods.

"I remember her on-screen so well as a child," wrote one commenter on Facebook.

"In hindsight, [it was] amazing that the often stuffy, highly conservative, non-bicultural NZBC of the day had a talented Māori woman front and centre without any fuss (no te reo of course) ... She was terrific. Moe mai ra."

Another described her as a true pioneer. "Your elocution set the standard for broadcasters when there wasn't one ... haere atu ra e hoki!"

According to NZ On Screen's biography, Mrs Martin and her husband, Bert, retired to the Gold Coast in Australia in 1987. She died on 10 July.