Te Aupōuri broadcaster and Māori language exponent Kingi Ihaka has died at the age of 74. 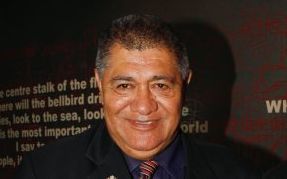 Before becoming a broadcaster, Mr Ihaka served in the New Zealand Army's Special Air Service Regiment. He served as a soldier in Borneo and Vietnam and was a strong advocate for repatriating the bodies of those who had died in those battles.

He was involved in the establishment of Māori Television and was a cultural adviser to many organisations.

His daughter, Jodi Ihaka, said he passed away surrounded by whānau after a long illness, and would be deeply missed.

"He was always giving, not only to us but to anyone who needed a friend, a mentor and someone who would listen," she said.

Fellow broadcaster Derek Fox said he was a natural and able to "spin a good yarn".

"Because he was a fluent native speaker of Māori, it wasn't surprising that when there was a need for Māori broadcasters that he gravitated in that direction.

"He did quite a lot of material for Waka Huia, whereby you went and interviewed somebody and you interviewed them at length - so you were able to get quite a lot of historical data from them. And he worked in that area for quite a while with Whai Ngata."

"We will all miss Kingi particularly his mātauranga Māori and his great sense of humour. We send our aroha and support to his whānau at this sad time," Mr Maxwell said.

Kingi Ihaka was born in Te Kao on 13 September 1942, the nephew of Sir Kingi Matutaera Ihaka.

His family are planning to take him to the Tātai Hono at the Church of the Holy Sepulchre, Auckland, for a night before returning with him to Te Kao tomorrow.