Tensions between iwi and conservation groups over the proposed Kermadec Sanctuary have erupted at an international conservation meeting in Hawai'i. 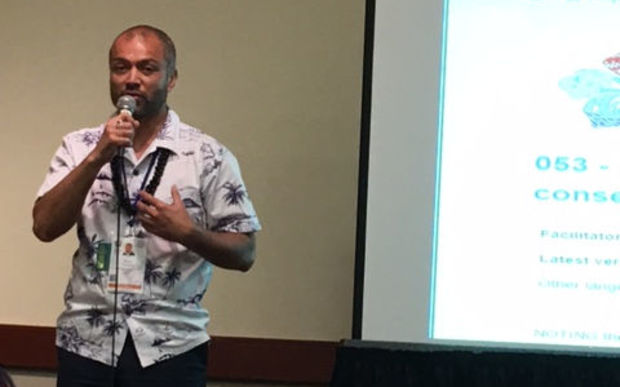 Government legislation is seeking to establish a protected marine area near the Kermadec Islands, but Māori iwi with fishing rights in the area have argued it is a confiscation of Treaty rights.

Maru Samuels is representing 14 iwi at the marine protection conference and said he was confronted by New Zealand delegate and co-chairperson of the Environment and Conservation Organisation (ECO) Barry Weeber.

"This guy comes straight across in front of everyone, starts tapping me on the shoulder, I turn around - like, I can tell it's a hard tap, it's not a friendly tap," Mr Samuels said.

"He says to me how dare you, how dare you come here and challenge us as New Zealand, and raises something that happened that I disagreed with and he started going hard core at me".

ECO is a New Zealand environmental network representing more than 50 groups and is at the conference with full speaking rights.

Mr Samuels, who did not have speaking rights at the conference, was invited to speak by a Rarotongan conservationist living in Hawai'i, Takiora Ingram.

Dr Ingram said the incident was witnessed by many delegates from different countries, including New Zealand Department of Conservation's representative.

"I actually had to step in between the two of them and ask him to leave because I felt he was going to provoke an incident, but then he challenged me too."

"And I said 'look, I'm not only a Cook Islander but I'm a New Zealand citizen, and I said your behaviour was very inappropriate - quite frankly an embarrasment for Aotearoa,' and I asked him to leave."

ECO is a New Zealand environmental network representing more than 50 groups and is at the conference with full speaking rights.

Mr Weeber said he was not sure why Dr Ingram stood up and was not clear who she was.

"She said that she was from New Zealand and Hawai'i, that's what she said. And that 'you were a disgrace to Aotearoa', I don't remember her saying that, she said something else. I can't remember what that was."

Mr Weeber admitted he did tap Maru Samuels on the shoulder but only to get his attention.

"It was trying to have a conversation and follow through with a request for a meeting."

"I was trying to, yeah, I was basically asking him a question and saying I wanted a meeting and making it clear to him."

A spokesperson from ECO's Wellington office said it was waiting to hear from its delegates before it could comment on the incident in Hawai'i.

Mr Samuels said Mr Weeber was the only delegate to challenge his invitation to speak.

He says being invited to speak was like hitting the jackpot.

"And I made a plea to the audience that this is our only voice - it's been our only opportunity. There was silence in the room, honestly, I ended up being the key speaker in this hui. This was the first time they'd ever heard our tribal view"

Te Ohu Kaimoana, an organisation that works to advance Māori Fisheries interests, has called the law proposal a confiscation of Treaty rights, saying it undermined the integrity of the 1992 fisheries settlement.