The Santy Maria was commissioned by iwi-owned fisheries company Moana New Zealand, which said the new boat was the start of a $30 million modernisation programme designed to set new environmental standards in trawling.

Chief executive Carl Carrington said it was the flagship vessel of a major modernisation scheme, the likes of which had not been seen in among fishing fleets in decades.

"It's the first fleet renewal programme in New Zealand really, since the '70s. It's the first of five or six boats we're hoping to build."

It was built by Nelson-based Aimex Service Group.

The boat's special features included modern fuel efficiency systems and world-leading trawling gear specially designed to minimise environmental impacts. It also featured advanced seabird protection measures, including that offal on board would be released when it was not trawling, and discharged below the water rather than above it. 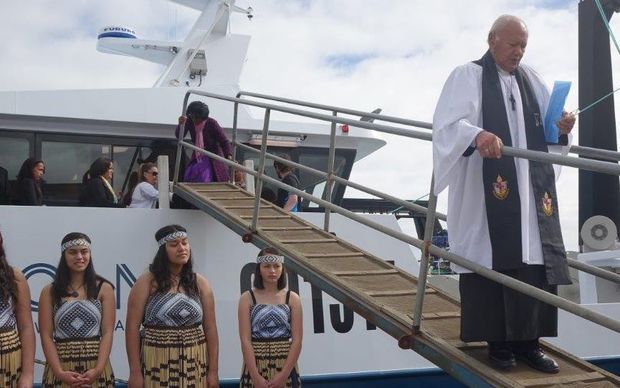 "The most significant thing about this boat is that it is geared up for precision seafood harvesting, which is new technology developed here in New Zealand by a coalition of Moana New Zealand, Sealord, Sanford and New Zealand Plant & Food Research," Mr Carrington said.

The Santy Maria will now head to its home port in Tauranga, where it will be operated by fisherman Roger Rawlinson, of Ngāti Awa descent. He named the vessel after his mother in recognition of his whānau's long history in the industry.

Mr Carrington said it had been a challenge coming up with a business model for the large-scale project, for which Moana had provided transitional finance to operators.

"So we're funding the vessel through the construction phase, then the fishers purchase the vessel back. For them to raise the finance through the banks - what we've done is commit a long-term quota plan so the banks have confidence about the earning security for the vessel," he said. 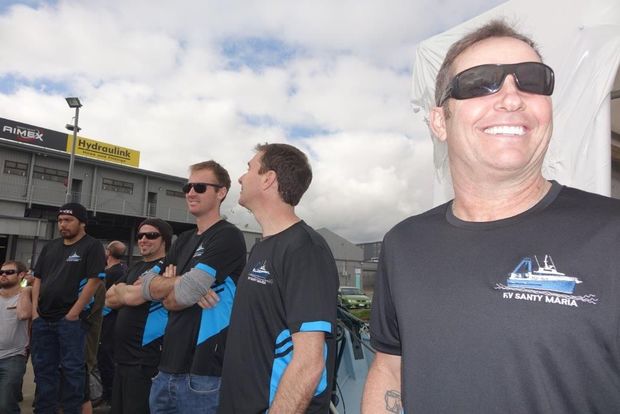 The crew of the Santy Maria. Photo: RNZ / Tracy Neal

"I also want to applaud Aimex for using this opportunity to introduce the Māori youth development programme, which allowed young Māori to gain hands-on experience of the marine engineering industry," Ms Reese said.

Minister for the Environment and Nelson MP Nick Smith said it had been decades since a new vessel was built in Nelson.

He said the boat-building industry was incredibly competitive and required huge levels of skills and technology.

Dr Smith said the Santy Maria had proved the naysayers were wrong.

"There would be many who would say, 'oh, a little country like New Zealand - a place like Nelson cannot compete with the Koreas or the great ship-building yards that exist in other parts of the world'."

The ship was blessed with the help of song by Nelson-Tasman kaumatua Archdeacon Andy Joseph, who led the crowd gathered onboard with a quiet rendition of 'Pokarekare Ana'.

Moana New Zealand chairman Whaimutu Dewes said there was hard work ahead in what would be a perpetual journey, but one with a solid goal in sight.