It's been 38 years since police and armed forces evicted protesters who were occupying Takaparawhau or Bastion Point on Auckland's waterfront. 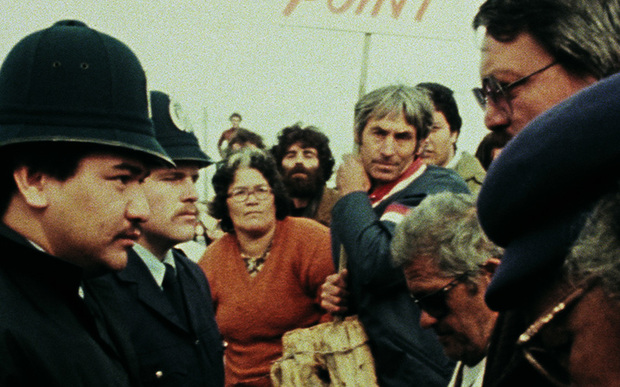 The last day of the occupation and the eviction was filmed and the documentary Bastion Point - Day 507 was released.

A restored digital version of the documentary was screened at Orakei marae last night.

The wharenui at Orakei marae, Tumutumuwhenua, was full of those who were part of the occupation, their children and their mokopuna.

As they sat in the dark watching, the newly digitised images of their past lit up their faces and reignited memories.

Grant Hawke was part of the occupation and has seen the documentary several times before but it still had the same effect.

"All those old faces, I still have all this aroha and mamae for them, they were the heart of the campaign they did all the mihimihi and waiata while we were doing our part to uphold our mana".

At the end of the screening Joe Hawke who led the occupation stood and spoke, he remembered why police came, and paid tribute to pakeha supporters of the occupation and how it was all worth it.

"It took three weeks to prepare the films and 50 hours to digitally restore the film and the scanning took four weeks, the film was only 27 minutes long but there are 1047 feet and about 41,000 frames and individual frames were scanned."

Ms Davy said it was all worth it.

"The people talking to their children about who was on the screen, there is nothing like that and that's the power of the archival image and the joy of being an archivist, there is nothing better than seeing that interaction and powerful connection.

Te Arohanui Hawke whose father, uncles and aunties were part of the occupation, was grateful for the new digital version of a doco he had watched several times growing up.

"This is the first time I could see faces and see what was happening in the day which made it more current."

He also said it was the struggle of his elders that had given him, and Ngāti Whatua o Orakei, the success it has today.

"We bear the fruits of their hard labour, personally I've got a new whare and and living like a hapū in our little community, actually living like it and not reading about it.

A copy of the newly digital version of the documentary was gifted to the people of Ngāti Whatua o Orakei.