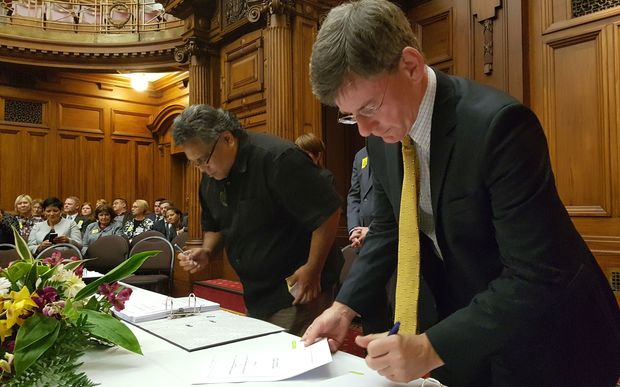 The settlement covers the second largest geographical area of any Treaty of Waitangi settlement to date, from north of Dannevirke, down to Tūrakirae (Cape Palliser) and the wider Wairarapa and Tamaki nui-ā-Rua regions.

The Rangitāne settlement will return a number of key cultural sites to both iwi and will provide the opportunity to purchase commercial properties, including Ngāumu Forest.

Pukaha Mount Bruce Wildlife Centre and scenic reserve will be given back to the iwi but they will return it to the people of New Zealand and co-manage the reserve with the Department of Conservation.

Jason Kerehi, lead negotiator for the Rangitāne Settlements Negotiations Trust, said the return of the centre was a key part of the iwi's settlement.

"This is the last remnants left of 1000 hectares of prime forest. It's really significant for us in terms of our relationship with the ngahere, but it's also significant because it pulls Rangitāne o Wairarapa and Rangitāne o Tamaki nui-ā-Rua together."

Mr Kerehi said this significant level of redress for an iwi with a relatively small population was testament to the extent of the loss suffered by the iwi.

"Our land and our identity are irrevocably linked."

The settlement has to be ratified by iwi beneficiary before being signed later this year.