Treaty Negotiations Minister Chris Finlayson said the Crown's actions in Te Atiawa included some of the most unfortunate episodes in the country's history, including the destructive Taranaki wars. 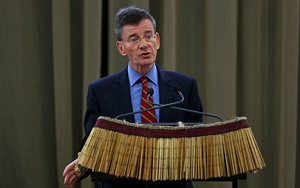 He told Parliament today the growing iwi had a vision for the future that moved from raupatu to restoration.

"The deed contains a settlement package which I hope will mark a new beginning in the relationships between Te Atiawa and the Crown.

"Key elements of the package include a quantum of $87 million and a cultural fund of nearly $1 million."

The bill also included the joint vesting with Taranaki Iwi of Ngā Motu/Sugar Loaf Islands, with the Department of Conservation continuing to manage the islands and public access being maintained.

The Taranaki Iwi Claims Settlement Bill provides for financial redress of $70 million and a cultural fund of $55,633.

It also included a provision for iwi representation on the Taranaki Regional Council's Policy and Planning Committee and the Consents and Regulatory Committee to allow the iwi of Taranaki to contribute to the council's decision-making processes.

The three bills passed their first reading unanimously and will now be considered by the Maori Affairs Select Committee.