It was a morning of celebration in Whangarei with a mountain-top ceremony affirming the correct name of the city's landmark - Mount Parihaka. 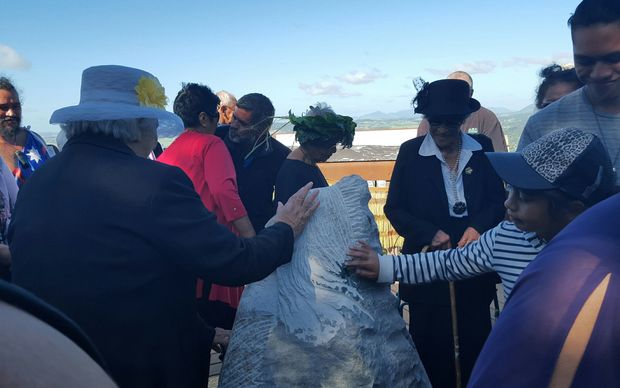 The stone represents the spirit of the mountain. Photo: RNZ / Lois Williams

Hundreds gathered at the summit overlooking the city for the opening of the new lookout, and the unveiling of a stone symbolising the maunga.

The sound of cicadas and birdsong mingled with prayers as priests and kaumatua blessed the kohatu - a rock carved by the tohunga whakairo (master carver) Te Warihi Hetaraka.

The stone represents the spirit of the mountain that was known incorrectly for most of last century as Parahaki.

It was corrected in 2005 by the Geographic Board.

Mr Hetaraka said since the 1930's Maori had been quietly reminding everyone that its true name is Parihaka.

"I witnessed that in our elders, who every time they announced it, there was always a sense of loss for them. The marae was the only place that kept the name alive."

Crowds queued in the sunshine at the summit to touch and hongi the kohatu.

"We respect this is our maunga, even though we're European, and we think this is a very cultural occasion and we needed to come today," on man said.

Whangarei's mayor Sheryl Mai said it was important for the city to affirm the name of its most prominent landmark.

"And now we've got the public coming to meet our beautiful kohatu for the first time, and the name Parihaka has been returned, the mana of the maunga," she said.

The new lookout is now open to the public.