Awaroa Beach in the Abel Tasman National Park should be returned to Māori and the government should make that happen, iwi leaders say 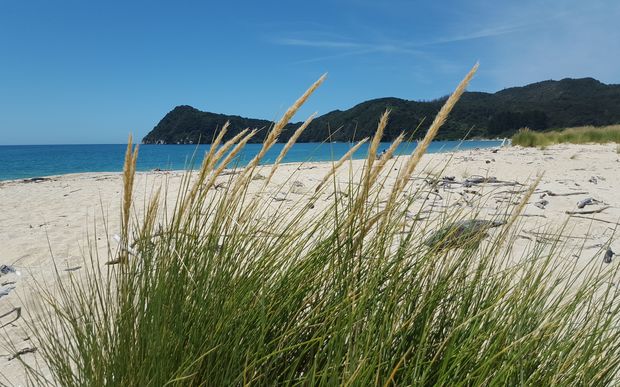 A public campaign has raised more than $2 million for the land.

The area surrounding and including the present Abel Tasman National Park was settled by Ngāti Rārua, Ngāti Tama and Te Ati Awa.

Wakatū Incorporation chairman Paul Morgan said his own immediate family lived on the other side of the entrance to the Awaroa, where most of the private dwellings were today.

"Most of that was cultivated land, there is good records of it, and burial grounds in those areas which are well known to DoC [Department of Conservation] and certainly well known to our communities."

If the campaign's tender is accepted tomorrow, Awaroa Beach will be owned by all New Zealanders.

He said his research was yet to find a whānau who had been compensated for it.

"The government should buy it off the private owners and hand it back to the whānau, the families that lost that land originally through confiscation."

The government has not said it wants to buy it but hasn't ruled out topping up the fund.

Te Rūnanga o Ngāti Toa Rangatira chairman Taku Parai said tangata whenua have been dismissed, despite their ties to the land and beaches.

"They mean a significant amount to us as Māori, especially as whānau."

He did not believe the land should be transferred to the public domain.

"Why wouldn't the government put its hand up to help out the local hapū and iwi down there to help purchase it back for them?"

Mr Morgan said that Awaroa should be returned to Māori and that most of his people would agree but he wasn't holding his breath.

"There is quite a lot of these places that were taken dubiously."

Late last year, the Wakatū Incorporation pursued Māori property rights in the Supreme Court and was now awaiting a decision.

"Put it this way, we have not been able to re-establish places like that through the Crown settlement and in my view that is very unsatisfactory."

Manawhenua ki Mohua Trust chairman Barney Thomas said he had been in communication with the campaign organisers.

"We agree in principle to get this transaction over the line and to make this property available to all New Zealanders and all visitors."

Mr Thomas and the Māori leaders Te Manu Korihi had spoken with agreed that the land belonged in New Zealand hands.