Northland iwi and hapu will commemorate the battle of Ruapekapeka Pā just south of Kawakawa tomorrow.

The battle, which marked the end of the Northern Wars, started in December 1845 and the pā defences were breached after a two week bombardment in the new year of 1846.

Ahead of this weekend's commemoration, RNZ Māori Affairs reporter Mihingarangi Forbes looks back at the history surrounding the fateful battle. 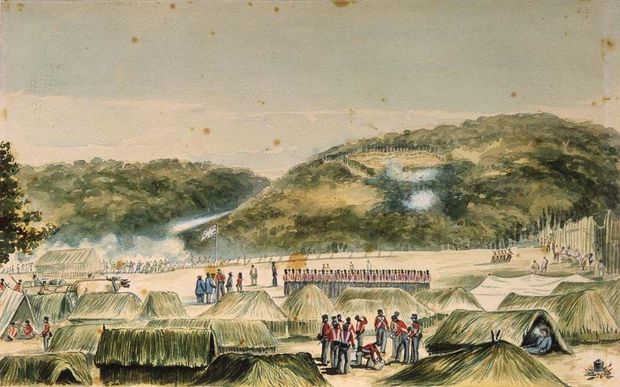 This painting by John Williams shows Ruapekapeka pā in the distance on a hill, with the smoke of gunfire around it. In the foreground on a flat area are British redcoats, some standing in line, some moving amongst raupo 'tents'. Photo: Alexander Turnbull Library / nzhistory.net.nz

Ruapekapeka pā was the final battle of the Northern Wars - and just who won it is still shrouded in controversy to this day.

Like their forebearers, Ngāpuhi descendants will gather at Ruapekapeka this weekend to stand on the same soil to commemorate the great battle of Ruapekapeka, 30km south of Kawawaka.

The Northern Wars began in early 1845 and lasted till 10 January 1846, but it was not just a conflict of two parties. A Ngāpuhi group led by Hōne Heke and Te Ruki Kawiti fought British troops and another Ngāpuhi group, led by Tāmati Wāka Nene, Eruera Patuone, Mohi Tawhai and Makoare Te Taonui, according to New Zealand History.

The wars began just five years after the signing of the Treaty of Waitangi as Māori - unhappy with the Crown's increasing control over their assets - began to seriously challenge it.

Ngāpuhi leader Hōne Heke climbed Maiki Hill in Russell and brought down the flagstaff along with it the British flag. The flagstaff had been gifted by Heke to fly the United Tribes of New Zealand flag but was replaced by Governor William Hobson. Heke saw the removal of it as a rejection of equal status for Maori.

Heke cut the flagpole down four times. When it was re-erected for the third time in January 1845, Governor Robert FitzRoy had it protected with iron cladding while Tamati Waka Nene, the opposing Ngāpuhi leader, provided guards for the government to secure the pole. 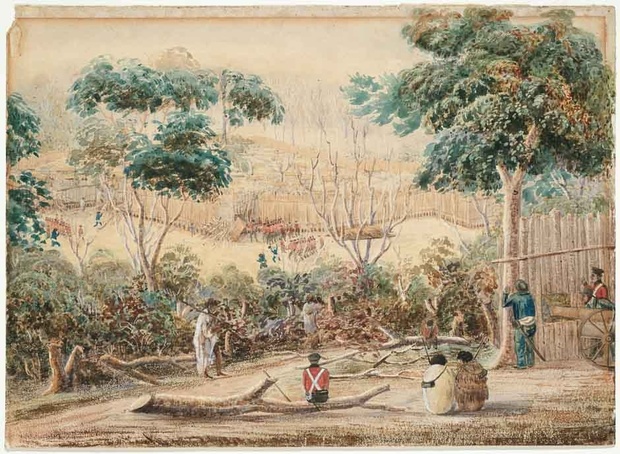 The conflict surrounding the flagstaff ignited tensions between the two opposing Ngāpuhi groups and the Crown, and a war footing or state of war was assumed at Kororāreka (Russell).

When Governor FitzRoy called for military aid, 140 soldiers and 200 armed residents moved in to defend the town of Kororāreka.

It was on the morning of 11 March 1845 that Heke and his 450 warriors moved in on the town. One group took the south end and created a diversion while Heke once again cut the flagpole down. Tāmati Wāka Nene and his men did not stop them.

The fighting continued throughout the day and when the powder magazine at the British troops stockade exploded, setting fires to buildings, the locals were shipped out to Auckland and a bombardment of Kororāreka was ordered, effectively sacking the town.

By the end of April 1845, 460 soldiers, marines and volunteers had arrived under the command of Lieutenant-Colonel William Hulme. A month later the British destroyed the pā of Otuihu before moving inland to confront Heke at a new pā Te Mawhe at Puketutu, according to New Zealand History website.

A battle took place at Te Mawhe. Eventually the British retreated and Heke and his men abandoned the pā.

The next battle at Te Ahuahu was Heke's most serious, although the Crown was not involved in this battle. It was between the two opposing Ngāpuhi groups and is described as the 'war within a war'. The pa at Te Ahuahu was taken by Tāmati Wāka Nene and Hōne Heke sought cover in Kaikohe.

By this time a new commander had arrived to led the British troops, Henry Despard assembled the largest force yet seen in New Zealand and moved on to Te Tuki, Kawiti's new pa at Ōhaeawai. 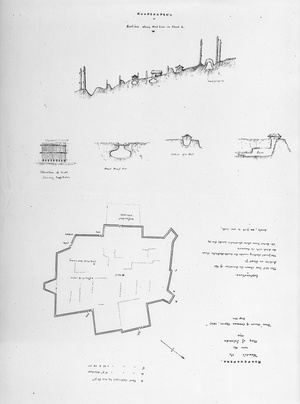 Charles Heaphy's pen drawings show a cross-section of the defences at Te Ruki Kawiti's pā at Ruapekapeka, including palisades, ditches, buildings and tunnels. There is also a plan of the outer defences of the pā, showing palisades, wells, gates and buildings. Photo: Alexander Turnbull Library / nzhistory.net.nz

Over a week from 24 June 1845 a troop of 615 men and five cannons bombarded the pā. Kawiti - who had just 100 warriors - launched a raid on the British artillery batteries and retreated. Despard assumed Kawiti was desperate and sent in 250 of his best men, but when they got within 20m of the pā Kawiti fired on them, leaving 40 dead and 70 injured.

Ōhaeawai became the prototype of the 'modern pa' - its occupants had dug trenches allowing them to move within it. A jagged fence (pekerangi) lined with flax matting helped absorb the gun fire and concealed an inner fence made of heavy logs.

Despard ordered shelling to recommence on the pā on 10 July and Kawiti withdrew the next day when the British moved in. While the British saw occupying an empty pā as a victory, few saw it as anything other than a victory for Kawiti.

A quest for peace ensued with Governor FitzRoy holding talks with Hone Heke through the missionaries. FitzRoy accepted most of Heke's terms but Heke was not supportive of the governor taking lands which Te Ruki Kawiti shared with a number of other Māori.

Bit it was in vain as in October FitzRoy was relieved of his position and replaced by Governor George Grey on 18 November 1845.

The negotiations broke down between the parties in early December and Governor Grey ordered Despard to attack Ruapekapeka, a new pā being constructed by Kawiti 30 km south-east of Ōhaeawai.

A force of around 1300 British troops and 400 Māori advanced on Ruapekapeka, heavily armed with artillery. Kawiti and his 500 men were joined by Hōne Heke and 60 others, with little artillery. On 10 January a full-scale bombardment began, which created three small breaches in the palisade.

The end of the battle the following day is controversial, with Governor Grey claiming a 'brilliant success'. Maori casualties numbered 30 and the British lost 45, with reports some of the British may have been killed by their own.

No ammunition or provisions were found in the pā which suggests it was abandoned. Many believe the battle was drawn.

Following Ruapekapeka, Kawiti and Heke met in Kawakawa and agreed the iwi could not keep fighting.