Forty years after she led the Māori land march to Parliament, Dame Whina Cooper is being remembered as a visionary leader. 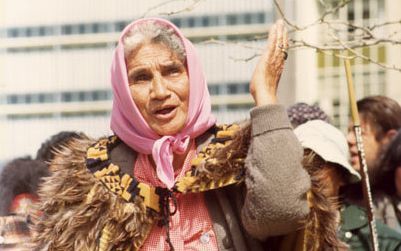 Today marks the 40th anniversary since thousands of people crammed onto Parliament grounds to witness the arrival of the protest group Dame Whina led from Te Hāpua in the Far North.

The protest group she led was called Te Rōpū Matakite, the group with foresight.

Māori Party co-leader Marama Fox said Dame Whina was indeed the right person to lead that group, considering her pioneering role in the Māori Women's Welfare League and other Māori initiatives she fought for.

"Dame Whina was absolutely visionary that title matakite was perfect for the Rōpū, but especially for her," Ms Fox said.

"She was also the first chair of the Māori Woman Welfare League. Not only did she lead political movements, the revitalisation of Te Reo came through her and was kicked off and buoyed through this process."

She said Dame Whina's provocative actions had led to Māori development such as the Kohanga Reo movement, Kura Kaupapa Māori, and that Dame Whina was an example and a leader who inspired these Māori institutions.

In 1991, Dame Whina Cooper of Ngāpuhi descent was appointed to the highest civil honour, the Order of New Zealand.

The hīkoi arrived at Parliament about a month after leaving Te Hāpua, bringing with them a petition signed by 200 elders and 60,000 other people.

It called for an end to selling Māori land and the control of 1.2 million hectares of whenua that was in Māori hands.

"This momentous hīkoi publicised treaty issues that were impacting on the lives of tāngata whenua and came at a time when Parliament was just passing legislation leading to the creation of the Waitangi Tribunal", said Māori Party co-leader Te Ururoa Flavell.