Musician Ranea Aperahama is on a roll this year, going from strength to strength with his latest album, Tihei Mauri Ora.

Now, the Porirua musician could be close to adding multi award-winning artist to his list of accolades, after being nominated for seven Waiata Maori Music awards.

The singer-songwriter saw success earlier in the year when his album, Tihei Mauri Ora, hit the number-one spot on the Te Reo Maori top 20 airplay chart. 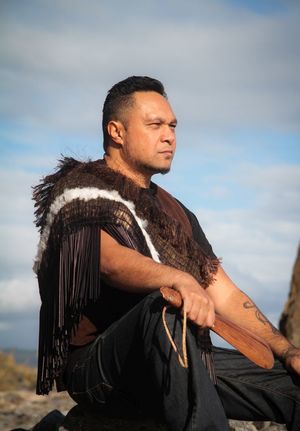 The artist himself is also up for three awards, including Best Maori Male Solo Artist.

Aperhama said he felt happy and humbled to be a finalist.

"I'm just grateful to be shortlisted and to see how it all unfolds - there's some big players in the selection."

"I don't go in with any expectations. If I do win anything, then I'd be even more grateful."

Aperahama said Tihei Mauri Ora brought a message of unity and encouraged people to be aware of social issues.

"[I want people] to be inspired and awakened in terms of Maori language, culture, a call of unity... Tihei Mauri Ora is the calling of our consciousness to not just go along and be 'baa baa black sheep'-type thing but to be aware of what's actually happening for us and our future generations - our children and our grandchildren."

The album is entirely in Te Reo and is one of few in the mainstream music industry, something which Aperahama thinks needs to change.

"I think there's not enough to be completely honest. There needs to be more support within the industry. The survival of the language itself, not only as a cultural thing, but as an economic language.

The Waiata Maori Music awards will be held in Hastings on September 11.