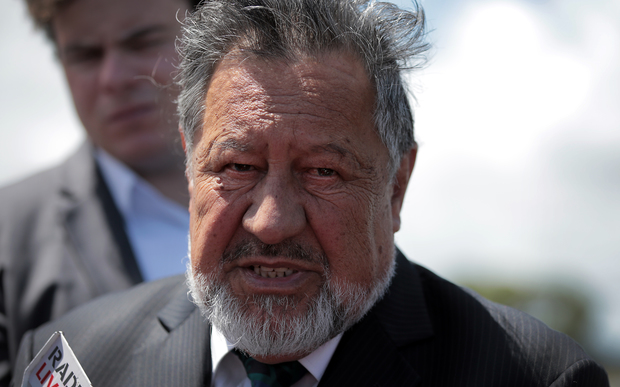 In June, he was appointed a Knight Companion of the New Zealand Order of Merit for services as a Member of Parliament and to Māori in the Queen's Birthday Honours List.

Sir Pita Sharples was at Government House in Auckland, where he was recognised at the Governor-General's investiture ceremony.

Tā Pita said, unlike other honours he had received, such as the doctorate title he earned as an academic, it was the people who put him forward that made this occasion so meaningful.

"But in this case it's special because the people nominate you," Sir Pita said. "In my case iwi, my iwi [Ngāti Kahungunu], and west Auckland organisations"

In his citation, it was mentioned that, in 2004, Sir Pita became one of the founders - and later a co-leader - of the Māori Party and, in 2005, the MP for Tāmaki Makaurau.

He retained that seat until his retirement last year.

In 2008, he was appointed as Minister of Māori Affairs and the Associate Minister for Education and Corrections.

In these roles, Sir Pita was instrumental in securing millions of dollars for Māori initiatives across the sectors of health, education, housing, corrections, Treaty of Waitangi settlement claims and social issues such as domestic violence and gangs.

Sir Pita also implemented a number of social support programmes to assist whānau, including family support workers and an initiative to support and mentor young parents.

He was instrumental in the development of a Māori youth council and established the Māori language review panel, Te Paepae Motuhake.

It is not the first time Tā Pita has been honoured by the Queen: in the 1990 Queen's Birthday Honours, he was appointed a Commander of the Order of the British Empire for services to the Māori people.

He was also one of the main founders of the first Māori language immersion primary school in Aotearoa - Te Kura Kaupapa Māori o Hoani Waititi in west Auckland in 1985.

Māori Party Co-leader Marama Fox said today was a significant day to acknowledge Pāpā Pita and his many achievements.

She said the former Māori Party co-leader of Ngāti Kahungunu, Ngāi te Kikiri o te Rangi and Ngāti Pāhauwera descent has made extraordinary contributions to Māori development over the past 50 years.

These include establishing the country's first kura kaupapa and also helping to set up New Zealand's only indigenous political party in Parliament.

Besides Sir Pita Sharples being acknowledged, there were also a number of other significant Māori people who were honoured at today's investiture ceremony in Tāmaki Makaurau.

Ngāti Kurī Trust Board chairman Harry Burkhardt received his Member of the New Zealand Order of Merit honour for services to Māori.

Nora Rameka and Tawhirimatea Williams were awarded their Member of the New Zealand Order of Merit honours for services to Māori and education.

And Harima Fraser, of Ngāti Rangitihi and Te Arawa, was presented with her Queen's Service Medal for services to veterans and Māori.