Credit Union Central's decision to provide some banking facilities in Ruatoria has been met with relief by residents, after Westpac decided to close its branch - the only bank left in the small East Coast town. 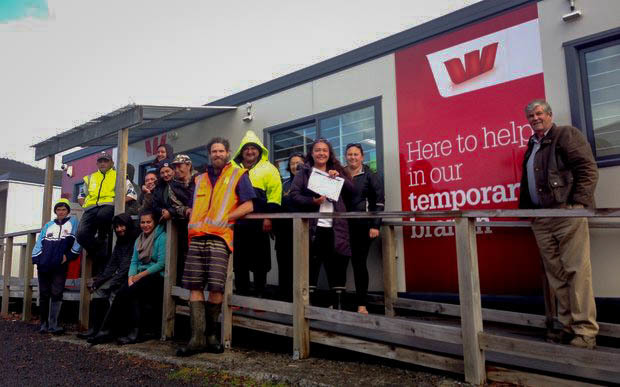 Residents with a petition signed by hundreds of people demanding the only bank in town stays open. Their campaign has the support of Gisborne District Councillor Bill Burdett (far right). Photo: Supplied

A high profile campaign was launched to prevent it shutting, but organisers say the community was left devastated in July when Westpac confirmed it would close in early September.

Those campaigning to keep it open warned that people would have to travel at least 150 kilometres to get to the nearest bank in the rohe and locals had only limited access to do internet banking.

Manu Caddie, one of the leaders of the campaign, said the announcement by Credit Union Central was very pleasing for the whole of the East Coast.

He said having a co-operatively-owned bank was the best option for any community, and there was a good fit between Ruatoria and the communities already served by Credit Union Central's branches in eastern Bay of Plenty and Gisborne.

"I'm confident they understand our unique situation on the coast, and it is reassuring to know that the credit union doesn't borrow from other institutions so the money they use all belongs to the members, and will be safer during the next financial crisis than any of the big banks."

He said locals would now switch their allegiance to the new bank in town.

"We have over 100 locals already signed up to transfer their accounts from Westpac and I think we can be proud of the way the whole community has stuck together on this issue to achieve a great result."

The bank will operate out of a local store on a 12-month trial basis. It will offer services such as bill payments, cheque books, personal loans mortgages and insurance, but will not provide cash.

A spokeserpson for Credit Union Central said in a statement that staffing levels were yet to be finalised, but it was hoped that some of the staff working in Ruatoria's Westpac branch would be employed in the new bank.

A date for when the branch opens is also still being finalised.

The bank has a presence in a number of small communities including Te Puke, Murupara, Kawerau and Ōpōtiki.