The Waitangi Tribunal questioned the Solicitor General about the secrecy surrounding the proposed Trans Pacific Partnership trade agreement at a hearing in Wellington yesterday. 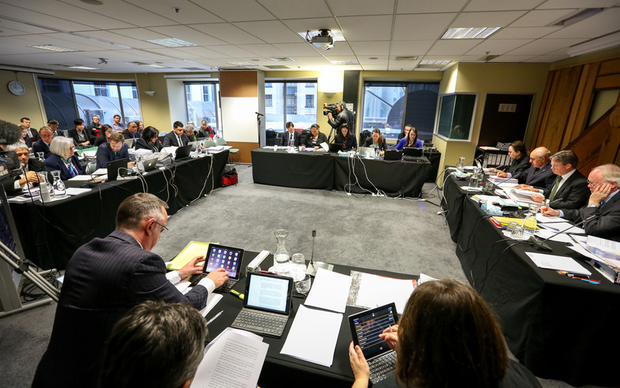 The Tribunal heard arguments from the Crown and Māori claimants on whether it should hold an urgent inquiry into the controversial deal.

Maori individuals and organisations from around the motu have filed claims alleging the trade deal will jeopardise their Treaty rights, while the Crown says it will not.

Claimants accused the Crown of a lack of consultation with Māori because it refused to reveal any of the processes or details of negotiations between Aotearoa and the 11 other countries involved.

Tribunal panel member, Sir Doug Kidd, challenged the Solicitor General, Mike Heron, as to how the Crown was able to consult with Māori if it couldn't share any information with them due to its confidential nature.

"Say we [the Crown] go to a marae and say 'we negotiating an important trade agreement with all the build-up stuff that goes up and we are interested in your views'. They might say 'about what?' and you say 'we can't tell you - [it's] secret'.

"And you come away in triumph and say 'the obligation's mutual, they told us nothing, and we've discharged our obligation to mutually consult. I mean that's kind of Gilbertian isn't it."

But Mr Heron said the Crown had engaged in meaningful talks with Māori during the TPP process.

"With respect, we don't agree with that version because it's clear that we haven't, and ministry people and other agencies haven't, been going along to meetings and saying nothing.

"Of course they've been discussing what free trade agreements [are] about, the types of things that are at issue, the things that New Zealand is trying to achieve and inviting comment as to well, what are the issues that trouble you?"

Tribunal panel lawyer David Cochrane also quizzed Mr Heron about what the Crown described as 'meaningful' talks with Māori during the TPP process.

Mr Heron defended the Crown's record and said it had consulted widely, including taking advice from Te Puni Kōkiri, Māori industry and bodies.

However, Mr Heron had to defer answering a number of questions put to him by the panel asking for details about which groups were approached.

The lawyer representing the Tai Tokerau District Council, Gerald Sharrock, said only a few groups, including the Federation of Māori Authorities, at talks with the Crown.

"The normal usual suspects of consultation have been ignored in this matter, and they [the Crown] restricted themselves to FOMA [Federation of Maori Authorities].

"The situation basically is from the statutory acknowledged entities - which are the District and New Zealand Māori Council's - there has been no engagement.

"They provide a comprehensive nation-wide representation for all Māori. If the Crown doesn't talk to them, they aren't really talking to Māori."

And he said even if the Tribunal agreed to an urgent inquiry, it may be too late.

"That would probably take a week I would say, but you see it's further complicated by the fact that by then there may be some ink on paper in Hawaii which would be notionally the deal done."

If an agreement is reached, it is scheduled to be made public in August next year.