The traditional Māori ball game of ki-o-rahi has had a global publicity boost this week. 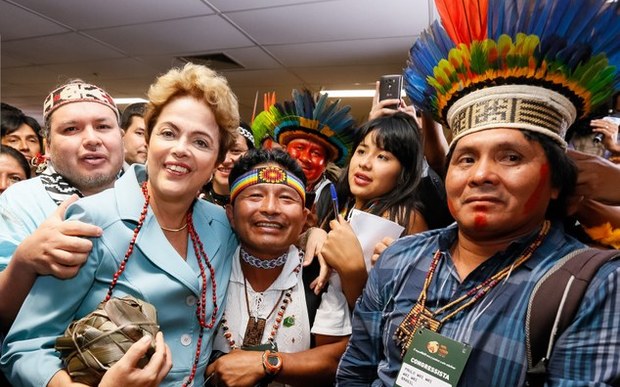 Photos of Brazilian president Dilma Rousseff holding a ki, or woven flax ball, have appeared in news outlets from South America to Washington.

The ki was created on the spur of the moment by Harko Brown, a Kerikeri man whose tireless efforts have revived the traditional sport of ki-o-rahi in Aotearoa and overseas.

He was in Brazil last week for a planning conference for the First World Indigenous Games, which will be held in October this year, when he spotted the raw materials for what could be described as a fusion ki: New Zealand flax and Brazilian coconut fibre.

"I was actually walking through a park with the event organiser, and we just came upon this coconut husk," he said.

"And I said to him... if we made a ki with this coconut, and the harakeke, which I'd already seen, it would really be a representation of Māori and Brazil, and he said that was a great idea."

Mr Brown presented his freshly-woven ki to one of the Brazilian chiefs, who presented it to President Rouseff when she opened the conference.

He said it was an immediate hit.

"She was just so passionate, you know, she just had that wairua about what the ki meant," he said.

"The president had a bit of a scripted speech for 20 minutes, and then the script just went out the door, and for 15 minutes she was just talking about this ki," he said.

"About how it was important as indigenous knowledge and technology; making something out of plants and also the whole concept of communication between countries - and the ki was actually the focus."

Photographs of President Rousseff admiring the ki promptly appeared in news media around South America and in the Washington Post.

Mission to bring back ki-o-rahi

Mr Brown learned to play ki-o-rahi from his elders as a boy in Waikato.

He revived the sport 10 years ago at Kerikeri High School, where he was a teacher.

He said the United States was an early adopter of the game and it was now on the curriculum of 31,000 American primary schools.

It was a little slower to catch on in its homeland, Aotearoa, but it was now played here in 800 schools, he said.

It was also popular in Italy and France, where Māori battalion soldiers taught it to the locals during World War II.

Te Rarawa chief Haami Piripi said it was good to see a Māori sport in the international spotlight.

"It's really great. Our elders who invented this game, they'd be absolutely rapt to think it's now gaining popularity around the world," he said.

Mr Brown said the old ball game, played on a circular field, was unique in that it was a game of strategy that men and women as well as boys and girls could play together.

It was traditionally played at Matariki, when even chiefs and slaves would join in games on an equal footing, after lengthy rituals that removed tapu and united people.

He said a contingent of 50 young people representing all the iwi of Aotearoa would take part in the First Indigenous World Games in Brazil in October.