An award-winning Māori fashion designer says although she is gaining international success she has a lot of work to do before she is acknowledged at home. 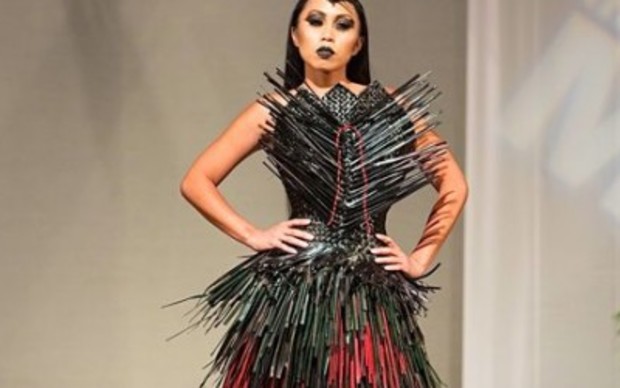 One of Shona Tawhiao's flaxwork creations on the catwalk at the MAMo Festival. Photo: Supplied

Her garments have hit runways in Paris, London, Melbourne and, most recently, Honolulu during the MAMo Festival.

She said attending the festival was a huge achievement as she was able to implement her dream of using taonga puoro, or traditional Māori instruments, and harakeke, or flax, couture together.

But Ms Tawhiao said back home in Aotearoa her work is undervalued.

"Internationally they [other fashion designers, industry leaders] have an open mind, culturally, to what's happening in other countries," Ms Tawhiao said.

"Whereas here, well, I get frowned upon a bit because it's [my work] too futuristic, too leading the way, and people are just worried about how I'm looking after the taonga of mahi rāranga."

However, the general manager of Toi Māori Aotearoa/Māori Arts New Zealand, Garry Nicholas, described Ms Tawhiao as a trailblazer and "a pioneer of the new and diverse expression of contemporary Māori fashion designers".

Ms Tawhiao said she was quite surprised to hear that.

"When I heard that Garry had said that I was quite blown away because Toi Māori helped us to go to Honolulu and the organisation was backing us," she said.

"And then to have a personal comment made about my work is amazing and I really appreciate that."

Ms Tawhiao said foreign fashion designers described her work as "edgy", "high fashion", "haute couture" and "avant-garde", which, she said, is exactly what she is trying to achieve.