The Māori Party is praising the Government for making some progress in addressing the outstanding issue of poverty among Māori. 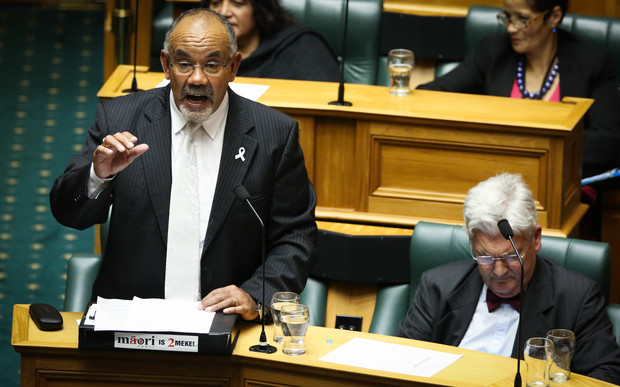 The Government has focused its spending on the issue and provided $49.8 million for Whānau Ora Navigators - the workers who act as brokers for Māori families and support them to achieve their goals. Māori housing also gets a boost with an extra $35.3 million invested. The fund will be co-ordinated through the establishment of a Māori Housing Network which has been given a kick start of $5.7 million.

The Minister of Māori Development said it would co-ordinate a suite of funds to support a range of Māori housing aspirations.

Te Ururoa Flavell was in a buoyant mood when announcing the funding in Parliament this afternoon:

"Today sir, the Māori Party has made history!" he said.

"It's taken 43 years, nearly half a century for core benefits to raise, Mr Speaker - who did it? A Māori party did it, with some help from National.

"In addition to this hard fought gain Mr Speaker, the Māori Party's also secured about a $100 million worth of funding for whānau, whare and whenua."

Key points from the Budget include a boost to benefit payments for families, a deficit and the end of the $1000 KiwiSaver kickstart.

A Māori child advocacy group says it is relieved the Government is finally addressing child poverty.

The budget contains a major package aimed at alleviating child poverty with $790 million being spent over the next four years.

"It's been a long time since benefit levels have been seriously addressed [with] $25 a week. While not enough, it's a movement in the right direction after decades of stagnation and growing poverty, so it'll be helpful in terms of the actual material needs of these whānau."

However, Dr Kaa said new budget rules meant parents would be pushed into work sooner and that was the wrong way to go.

Previously, a sole parent had to be available for part-time work when their youngest child turned five, but now, it had dropped to the age of three.

Hirini Kaa said there was evidence to prove that if tamariki were separated from their parents too soon it created bigger problems down the track.

"Forcing parents to brake that connection too soon can be very problematic down the road," Dr Kaa said.

"We don't see the results of that for quite a while in a lot of cases. There's early childhood education, but again we're finding some difficulty in terms of putting these babies into childcare too soon. Also the availability of appropriate work for these whānau.

"Whether it is there or not and whether they'll be penalised in the absence of this work is a challenge as well."

Dr Kaa said he applauded the work of the Māori Party and their strategy of being at the table to bring about gains for Māori in this year's budget.

But, another Māori child advocate, Anton Blank, said the additional support for families was not enough to stop Maori child poverty.

He said the Government had only made minor adjustments and given small concessions.

"In terms of the escalation of child poverty that we've seen over the last 30 to 40 years I don't think it's enough to substantially reduce the rates of Māori child poverty," Mr Blank said.

"So we know at the moment that Māori children are more than three times as likely than other groups of children to live in poverty, and the measures they've introduced will result in small improvements for some groups of Māori children, but overall there's not enough to bring about substantiated change."

Mr Flavell said Māori landowners would benefit from new money being earmarked for a fresh initiative - the Ture Whenua Māori Network, $12.8 million will go towards the network to help Māori landowners improve the productivity of their land.

Regions targeted in the initiative include some of the poorest rohe in the country such as Northland, Gisborne, Bay of Plenty, Manawatū and Whanganui.

Preventing Māori youth suicide has also been made a priority.

The suicide rate among rangatahi Māori in 2011 was nearly two times higher than the suicide rate for the rest of the population. To tackle the problem just $2.1 million is being invested via the Whānau Ora approach.

Māori Development Minister Te Ururoa Flavell said there would be a continued focus on the promotion of Māori language and culture with $82 million being funnelled into Māori broadcasting entities and Te Taura Whiri i te Reo Māori - the Māori Language Commission.