A Māori language immersion school in northern Hawke's Bay says it has had to wait 20 years before it could build suitable and permanent buildings. 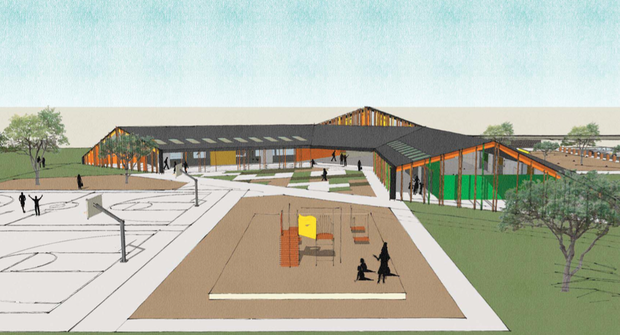 The new school was built on a property in front of the old kura and only took 10 months to construct after receiving government funding of $4 million.

But the tumuaki, or principle, Anaru Ratapu, said he was unsure how the school received such a huge cash injection because the initial sum, much like the original school, was rather modest.

"They've had to put up with a second-hand kura... and I'm not sure how it all happened but we started off with $300,000 to build a wharekura (secondary Maori language school), then next minute it came up to a million dollars, and then by last year it came up to $4 million and we're really really happy about it, it means a lot to us that we've been able to get a kura that we designed ourselves".

"That's probably what the objective of most schools is", Mr Ratapu said.

"But for me, the only way to attract them whether we got a good school or not, it's through good teachers, good learning and where the parents feel safe that Te Reo Māori is the pathway for them.

However, Anaru Ratapu made it clear that Te Kura Kaupapa Māori o Ngāti Kahungunu o Te Wairoa was only there to cater to the needs of children whose parents are totally committed to the Māori language, and for tamariki who can already hold a conversation in Te Reo.

"Some children come and they haven't got the reo and you spend a year or two trying to teach them how to speak Māori and then they start to learn.

"Its really only the pono (true) to the kaupapa (philosophy) o Te Reo Māori [parents] who will send their children here".

Mr Ratapu said the first question they always ask parents who want to enrol their tamariki at the kura is if they can speak Māori, and if it's not then they don't allow them to start their schooling there.

He said the reason why the school made that decision was because, especially when they try and enter at a senior level, students who can't speak Māori will be on the "back foot all the way".

inclusicivity, respect for one another, that validates Te Reo, culture and spirituality.

"We're lucky that we have one of our kaiakos (teachers), our last tumuaki was part of Te Aho Matua... she was the tumuaki who started the groundwork for [the new curriculum] [and] for the new building".

Mr Ratapu said there were no designs yet on the school buildings but that will come eventually and will be a way that the tauira (students) can be proud and claim ownership of it.