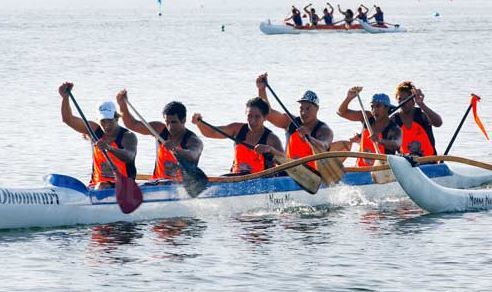 The four day event started today and is being held at Lake Tikitapu, or Blue Lake, where 1450 paddlers from 97 schools are competing.

The Chief Executive of Waka Ama New Zealand, Lara Collins, said not only did it include schools from Aotearoa, but a group of paddlers from Tahiti are coming to test their skills in the race.

"There's a school from Tahiti - they've been over three times, I think, in the past and they've come back this year," said Ms Collins.

"The name of the school is Collège de Pao Pao and they're from the island of Moorea. They host a race every year, this time of year, [and] Gisborne Boys' High School went to Tahiti to compete in their race and they've come back with them to Rotorua to compete this week.

"So, there's two boys teams and a girls team from Tahiti that are competing, so it's pretty cool".

Ms Collins said it was a water sport: rain or showers won't cause the event to be cancelled, however if there were strong winds it could delay some races.

The competition has been running since 2002 and organisers say it is growing in popularity every year from young people of all ethnicities.