A Hauraki iwi, Ngāti Tamaterā, fears its tribal waterways could become polluted because of mining work by a company running tests at Karangahake, south of Paeroa. 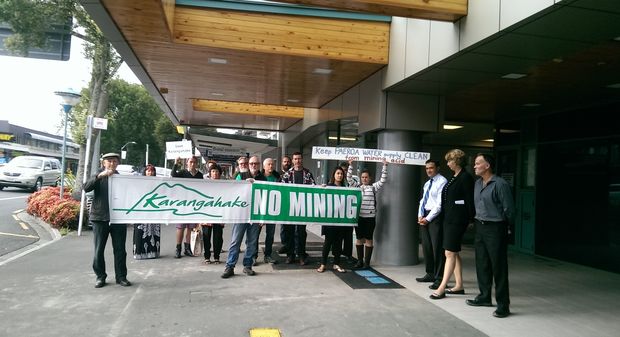 Members of the iwi have rallied alongside a small group called Protect Karangahake, with both opposing New Talisman Gold Mines' operation.

They protested outside the Waikato Regional Council.

The group of about 15 people sang before its chair, Duncan Shearer, presented the council with water from the Waitawheta River, in what looked like a cup and corked jug made from clay.

He said they were there because of water.

He told members of council, including the chair, Paula Southgate, that the water he held was clean enough to drink, and is consumed by people of Paeroa.

"I want to make sure it stays like this for future generations."

They also showed off a petition with nearly 5,000 signatures, which will be delivered to the council in due course.

After the proceedings, 26-year old Rebecca Brownlee, who is a Ngāti Tamaterā descendant, had some strong words for the council.

"I just want to say, use your common sense. I mean, you've already raped this country enough.

"Why are you trying to do it to something so precious and beautiful like the Karangahake Gorge and our river?

"Think of all the other people, who want to experience it, like my kids, and my kids' kids....".

Protect Karangahake said the council had failed to consult the public properly, and it was worried New Talisman's work could result in acid ending up in the waterways.

But the chair at the Regional Council, Paula Southgate, made it clear that clean waterways are important.

"I recognise the passion, and I acknowledge that most people in the Waikato share the same passion about quality.

"The Waikato Regional Council is here to enhance and maintain water quality [and] not to see it degrade, and that's the ultimate goal for all people."

The resource consent issued to New Talisman in 2013 specifies that it should ensure contaminants don't end up in the water, and also says that there shall be no discharge of contaminants to any flowing water channel.

The company's chief executive, Matthew Hill, questioned why anyone would think the water would become contaminated:

"When you're not discharging any water, how could it possibly pollute any water?"

Meanwhile, a trustee with the Ngāti Tamaterā Treaty Settlement Trust, Liane Ngamane, who was not at the rally, said it was not opposed to mining, but wanted the environment protected.

This was why it is in treaty talks with the government about co-management rights, which include the area where the company is working, which she says aims to provide a long term solution.

She wants to make sure that previous mining problems, which she recalled a kaumatua told her about, do not happen again.

"One of our kaumatua, who... a number of times recounts swimming in the awa [river], [and that] they had to leave at a certain time when the old mine would release the contaminates... the cyanide etc.... into the awa. They knew to get out at a certain time."

"And they also witnessed things like our tuna [eels] kind of [swimming] with their heads above the water struggling to breath.

"That doesn't mean that Ngati Tamatera is opposed to mining, necessarily, today. [But] it's about the effects of any activity on that awa that count. Whether it's mining or whether it's agricultural use further down stream."

Protect Karangahake will legally challenge the consent, and said a judicial review was to be held later in the year.