The Waitemata District Health Board says a new diabetes service at an Auckland-based Maori health centre is drawing in more tangata whenua than the DHB. 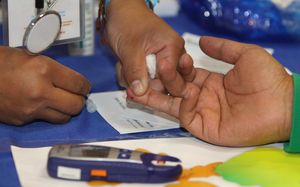 Te Hononga Oranga was launched yesterday at the Waipareira Trust's Whanau House in Henderson and was being run by the DHB.

Seven percent of the 28,000 people known to be living with diabetes in the region are Maori.

The group manager of He kamaka Waiora at the DHB, John Paterson, said data shows that more diabetics are getting help from the new service.

Mr Paterson explained how many tangata whenua had been booked in to the district health board.

Fewer than 500 Maori on average had their first diabetes assessments there over a four-year period since 2010, he said. Over that time, there were 1170 follow-up appointments and 340 of those people did not turn up.

Though the data was new, he believed the statistics at Whanau House were positive.

As an example, in the month of September, it had 24 diabetes appointments scheduled. Mr Paterson said 22 were of Maori descent and only one person, who is not Maori, had not kept the appointment.

Mr Paterson said the diabetes service at Whanau House also opened up opportunities for patients to access other services, such as seeing a GP.

The service was originally set up to operate twice a month, but was now running twice a week and would continue to grow, he said.