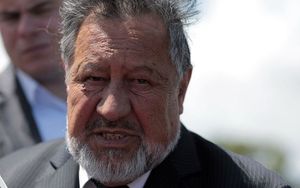 Pita Sharples oversaw the establishment of the board. Photo: RNZ

After failing to win selection last year, the broadcaster sought a judicial review challenging the selection of Tony Kake as one of two mataawaka representatives on the board.

The board is made up of nine members who have tribal ties to Auckland and two who live in the city but don't have tribal ties (mataawaka representatives). It was one of those appointments which Mr Jackson challenged, believing that he had more support than Mr Kake.

The other non-iwi representative is John Tamihere, but Mr Jackson did not challenge that appointment as he believed there was sufficient support for Mr Tamihere.

In his ruling, Justice Duffy said the decision appointing Tony Kake is set aside ordered the board to undertake a re-selection process in accordance with the law.

Pita Sharples oversaw the establishment of the board and believed that the High Court had got it wrong and the decision was unfortunate.

"I'm disappointed in Willie. I just don't think it's right that he purports to fight for Maori rangatiratanga (sovereignty) on the one hand and when we get it, challenges it with the Pakeha judges in court."

The board said it was considering the court's decision, and Mr Kake was seeking legal advice.