A Moriori trust has told the Environment Protection Authority it opposes a bid to mine phosphate from the seabed, believing it could jeopardise 60 percent of the country's commercial fishery. 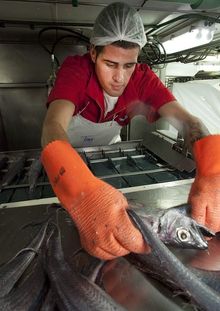 The hoki catch from the Chatham Rise is valued at $730 million, a Moriori trust says. Photo: PHOTO NZ

The authority's decision-making committee is conducting a hearing on Chatham Rock Phosphate's application to look for phosphate used to make chemicals and agricultural fertilizers.

Maui Solomon, general manager of the Hokotehi Moriori Trust, made a submission yesterday.

Mr Solomon said the trust opposed the company's application because of its concern about the marine environment, including the value of fisheries resources to Moriori and New Zealand.

The Chatham Rise is a special place of ecological richness for Rekohu, New Zealand and the Pacific, he said, contributing at least 60 percent of New Zealand's commercial fisheries.

About 30 percent of the hoki catch comes from the Chatham Rise, which is valued at $730 million, he said.

The hearings are expected to continue until 19 November.