The Waikato Waikato District Health Board's Maori health unit is urging the Government to develop a national plan with compulsory referrals for pregnant smokers to help them quit.

Te Puna Oranga has found that about half of the 400 pregnant Maori women in the district are smokers and aims to change that. 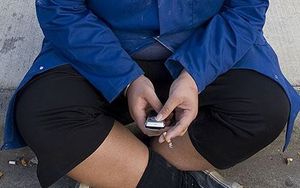 The unit wants women who need a Caesarean or have diabetes to be referred on. Photo: PHOTO NZ

It wants the ministry to develop a targeted approach in which all staff, including doctors, would be trained in smoking cessation, and all midwives would be issued with carbon monoxide machines. The device checks if a mother has been smoking and measure the effects on a baby.

Alys Brown trains midwives in smoking cessation and is calling for a national strategy to include compulsory referrals. She said best practice would ideally mean that a woman who needs a Caesarean or has diabetes are referred on.

Ms Brown questions why this cannot be mandated for a woman who is pregnant and smokes to be compulsory, which would mean providing the right care at the right time.

She predicts the referral would be compulsory, but an expectant mother would have the right to opt out if she wanted.

The Ministry of Health has not directly responded to the idea of a national approach. However in a statement, it said encouraging pregnant women to quit is already a priority.

The ministry said it offers pregnant women who say they are smokers the opportunity to get support and advice. It said all professionals should ask if their patients smoke and should strongly encourage them to use cessation support.