The people of Ngāti Porou are mourning the death of nationally respected cultural adviser Amster Reedy, who died yesterday following a stroke. He was 70. 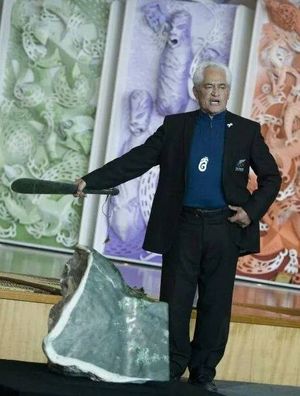 According to messages posted on social media by Mr Reedy's daughter Anita, he passed away just after 10pm at Gisborne Hospital. He was officially born with the name New Amsterdam Reedy and was just eight days shy of his 71st birthday.

The Ngāti Porou man was well regarded not only his own iwi, but by those he taught at secondary school, by those he worked with in broadcasting and also by New Zealand's Olympic Games team and the All Blacks to whom he gave cultural advice to.

Speaking at the Nurses Organisation annual conference in Wellington this morning, the Māori Party's candidate for Ikaroa-Rāwhiti, Mārama Fox, paid tribute to him:

"Papa Amster Reedy would go in person whenever he was called, and was able, to the birth of children around this rohe (in Wellington) ... and he would mihi (greet) them in a way that is uniquely Māori," she said.

"And so it is right that we mihi to him and acknowledge the amazing contribution that he has made to our community and to the health community as well".

Mārama Fox said before she arrived at the conference the rest of her Māori Party colleagues were also in mourning and co-leader Tariana Turia wanted her to let everyone know at the hui of the death.

Amster Reedy was an academic and gained a PhD after studying the ancient art of oriori, or lullabies, which he performed when babies were born. He taught at Taitā College in Lower Hutt, near Wellington, in the 1970s.

Mr Reedy's tūpāpaku or body is lying at Hiruhārama Marae, near Ruatoria on the East Coast. His funeral will take place from 11am on Saturday.

Amster Reedy was the cultural adviser and kaumatua for the New Zealand Olympic Games Committee and led teams in Athens in 2004, Turin (2006), Beijing (2008), London (2012) and the Melbourne Commonwealth Games in 2006.

NZOC communications manager Ashley Abbott said he had left a legacy which embraced Māori culture which all teams that were led by him were proud of. She said he was an inspirational leader for the organisation and leaves big shoes to fill.

Ms Abbott says one really significant contribution that Mr Reedy made was being part of the development of the One Team One Spirit approach - which was created around the time of the Athens Games.

The philosophy behind that was to put the athletes first within the team and to instil a whole of pride in New Zealand and pride of the people of the host nation.

Ms Abbott said new traditions and rituals originated in 2004, including the use of Te Mahutonga - the Māori cloak worn by the flag bearers, and a mauri stone which sits within the team. These were developed under Mr Reedy's guidance.