King Tuheitia has opened up about his health and one of his sons getting into trouble with the law - calling the media coverage of the case a "circus". 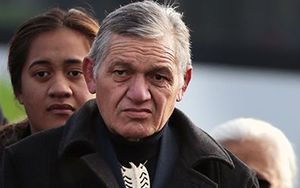 He made the remarks during his eighth koroneihana speech at Turangawaewae Marae in Ngaruawahia yesterday.

The king acknowledged his fight with diabetes and cancer, and told followers his conditions are being kept under control.

He then went on to discuss the court case for his son Korotangi Paki, who was discharged in July after pleading guilty for drink driving and burglary.

In court, the lawyer for the king's son said a conviction for any criminal offence would hurt his chances of succeeding his father.

But King Tuheitia said the media sensationalised his statement which he said read "it is possible that one day he may succeed me".

The king complained that remark was taken out of context, his family has faced trial by media, and that most people now thought he used a false excuse to get his son off.

The koroneihana was attended by VIPs from around the world, and King Tuheitia said it was not the speech he wanted to make to his overseas guests.