Time's running out for some sperm and embryos being stored across the country and a Maori researcher says those with frozen samples should make sure theirs are safe. 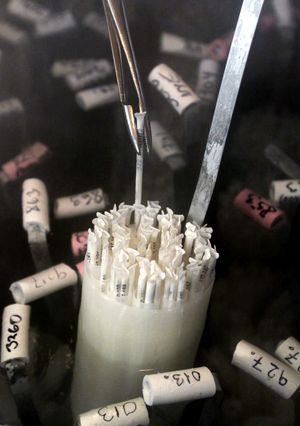 Frozen assets - time's up for some stored sperm and embryos. Photo: AFP

By law in November, storing facilities will have to dispose of reproductive cells and tissues over ten years old.

By law in November, anything that's been in storage for more than ten years will be destroyed, unless an extension is granted.

This is the first time mandatory disposal will take place.

A researcher at Waikato University, who's exploring how Maori tissue is used and stored, Maui Hudson, said there there weren't many Maori donors and that it was rarely talked about.

But he said some of the people involved would be devastated if their situation changes and they needed the sample, only to find it had been destroyed.

Mr Hudson said discarding reproductive cells and tissue was sacred to some Maori because of the possibility it had to create life.

Dr Richard Fisher of Fertility Associates, which stores 75 percent of the country's frozen reproductive cells and tissue, said there were still about 300 people out of thousands to come forward and decide.

"The law says that you cannot store gametes, sperm or eggs, or embryos for longer than 10 years without seeking consent from the ethics committee to extend the storage," he said.

Dr Fisher said those who wanted to could take them home, and those that decided on disposal could choose how they'd like that done - this could range from taking it away in a test-tube or having them destroyed as biological waste.

But they couldn't leave them in storage.

"We've done things like search electoral roles, we've sent out registered letters, we've made every possible way of contact we can."

Dr Fisher said some of the samples had been frozen since 1996.

He said people who knew they would be using their sample in the next couple of years could apply to get a short-term extension on the storage.