There are mixed reactions amongst aboriginal Australians about their Prime Minister, Tony Abbott's plan to stay in a remote community for a week.

This September, he will spend a week in Arnhem Land in the Northern Territory.

Mr Abbott made a commitment to live in an aboriginal community - if he was elected to government. 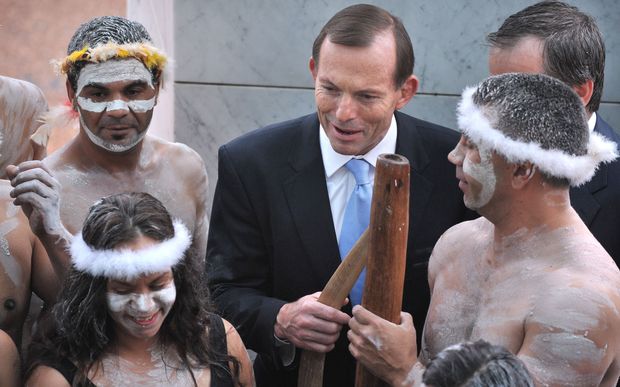 Australian Prime Minister Tony Abbott talking to an Aboriginal performer at the opening of the 44th Parliament in Canberra last year. Photo: AFP

The political correspondent in Canberra for the National Indigenous Television service (NITV) Myles Morgan said while most people would make Mr Abbott feel welcome, there was some suspicion he had ulterior motives.

He said half the aboriginal leaders he had spoken to seemed happy about it because having the prime minister's undivided attention was good on any day no matter where he was, or who he was speaking to.

But Mr Morgan said other indigenous people thought Mr Abbott was just trying to flex his muscles and go there for a quick photo opportunity, and not dedicate any significant time with them.

He said unlike previous prime ministers, Tony Abbott's approach was to actually consult with indigenous communities rather than forcing interventions on them.