A Taranaki tribe that rejected a deed of settlement said it stepped away because the Crown was failing to recognise the global importance importance of Parihaka. 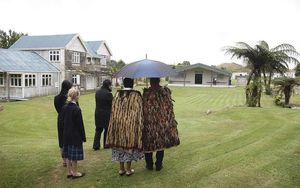 Visitors waiting to be called onto one of three maraes at Parihaka. Photo: PHOTO NZ

The tribe said it had always maintained that a Taranaki Iwi settlement that failed to provide for Parihaka was incomplete, unacceptable and therefore, not a settlement.

Taranaki Tuturu iwi lead negotiator Jamie Tuuta said Parihaka had a significant history, not only in the rohe (region), but the whole motu (country), and that needed to be reflected in the settlement.

He said the settlement did not go far enough to provide support and address the ongoing legacy of Parihaka.

Mr Tuuta said although the package was largely complete, it was decided to delay initialling a deed with the Office of Treaty Settlements until the importance of Parihaka was written into the Crown-Iwi agreement.