Proposals for marine reserves in the Bay of Islands are coming in for stiff opposition from local Maori.

The community group, Fish Forever, is proposing two no-fishing zones - one off Urupukapuka Island and one off Rawhiti Peninsula.

The two Rawhiti hapu, Ngati Kuta and Patukeha, said they had had several talks with the group but asked it to taihoa (delay) because they were swamped with work on their Treaty claims.

A Patukeha hapu spokesperson, Richard Witehira, said it was upsetting that Fish Forever ignored that plea and forged ahead without agreement on location and management. 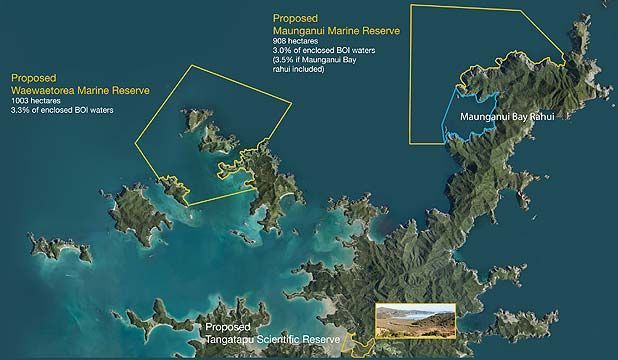 He said gone were the days of a government department controlling an area from Wellington.

Mr Witehira said he had no concerns if an area which was gazetted was controlled by the community.

But he said he told Fish Forever that if the Government came in and took over he would not support it.

Mr Witehira said hapu might support a marine reserve off Rawhiti, if there was community management and a 25-year time limit.

But he said they would never support a no-take zone off Urupukapuka because they needed the abundant kaimoana from that area to feed their families.

Mr Witehira said it would make more sense to locate a marine reserve around the snapper breeding grounds, further out in the bay.

The hapu will call a hui later this month to discuss what action to take on the marine reserve proposals.

Fish Forever is calling for public submissions on the idea, on its website.