The Whanganui Artists Trust, Manawa Ora, is paying tribute to a vegetable that became the first water bottle for Maori and other indigenous people.

A hue or gourd exhibition went on display at the Whanganui Regional Museum last month.

It features historical hue or taha, and contemporary carvings, weaving and drawings acknowledging the plant and the Maori deity, Hine Pu te Hue.

A contributing artist from Manawa Ora, Marilyn Vreede, said the hue was a significant taonga for Maori, enabling iwi to travel beyond river boundaries.

She said the hue was also used by Maori as a floating device and musical instrument.

Mrs Vreede said primary schools in the region would learn about the tahā and would compete to grow the biggest and prettiest hue.

She also said Maori art should be able to be modernised to engage rangatahi, saying there seemed to be some confusion about what Maori art was today. 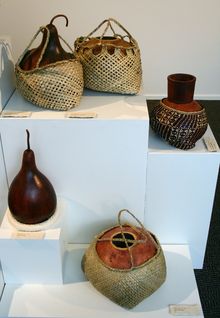 Maori art, she said, was no longer just about koru and kowhaiwhai.

Mrs Vreede said taonga were precious and if they could be displayed in a form that young people could relate to then that needed to happen.

She said art could be used to celebrate who Maori were today and revive traditions.

The exhibition, Taha - A Conversation With Hine-pu-te-hue, will run until February 2015.

The opportunities are available through Creative New Zealand over the coming months, in areas such as preserving Maori heritage and supporting emerging artists.