A Waikato-Tainui kaumatua is applauding the Maori King for speaking out about his teenage son, who will be sentenced for burglary and theft charges in July.

Korotangi Paki, 18, pleaded guilty in the Auckland District Court on Monday to two burglary charges and one charge of theft from a car. 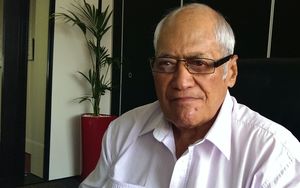 Waikato-Tainui elder Koro Wetere, of Ngati Maniapoto, said the king should be applauded for speaking out and disapproving the actions of his son.

The king's spokesperson, Tukoroirangi Morgan, said Kingi Tuheitia told his son his actions were unacceptable, and he expected more from him.

He said the King expected his son to face the full weight of the law.

Before his son's court appearance, King Tuheitia told Fairfax Media he had gone off the rails. He said his son knew what he had put him through.

The king's spokesperson, Tukoroirangi Morgan, was at the hearing.

He said he was at a meeting earlier with the pair where King Tuheitia made it clear to his son that he wanted him to get back on track.

Mr Morgan said Paki was completely remorseful and regretful for his actions and had embarrassed the tribe and the Kingitanga.

Mr Morgan said a kaupapa Maori restoration programme had been designed to help Paki get back on track.

Paki will be sentenced on 3 July. In 2011, he faced charges for crashing a vehicle into a pole.