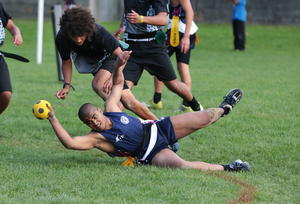 The kura from north Waikato returned home on Wednesday from Lower Hutt as the national champion of the ancient Maori ball game.

Behind them in second place was Turanga Tane - Turanga Wahine or Gisborne Girls' and Boys' High Schools combined.

A teacher from Taita College, Simon Hirini, said though each rohe had their own local rules, the twenty two schools who competed made a great effort to adapt to different regulations.

He said the secondary schools had to collectively lift their game.

Mr Hirini said the organisers sent out the rules for the national competition last year to give schools time to practise and play to a standardised version of the sport.

He said they all agreed to come and play by the national rules and it showed how versatile the rangatahi were.

Ki o rahi was still an emerging sport and even the referees at the national competition were at different levels.

The next national ki o rahi tournament for 2015 will be hosted by Gisborne Girls' and Boys' High Schools.