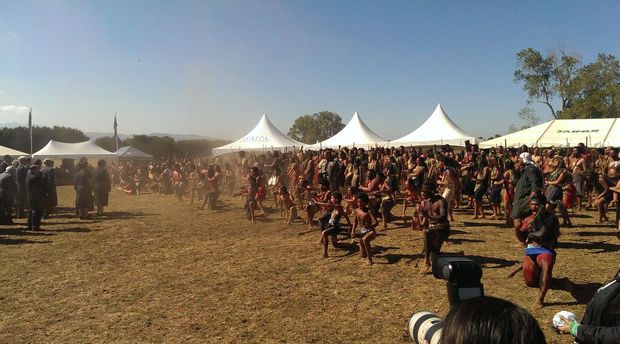 Powhiri for the official party at the site of the Battle of Orakau. Photo: RNZ / Andrew McRae

Tuesday marks the 150th anniversary of the Battle of Orakau, when 300 Maori fought against an 1100-strong force of British and colonial troops. About 150 Maori were killed.

A special ceremony marking the battle has been held at the site where it took place, near Kihikihi, south of Hamilton.

The Maori King's representative, Tukoroirangi Morgan, spoke directly to Mr Key in front of a crowd of people and urged him to do the right thing and return the site to Ngati Maniapoto, Ngati Raukawa and descendants of the first Maori King, Potatau Te Wherowhero.

Mr Morgan said he and others went along to the service to mark a tragedy in the history of New Zealand, where patriots, heroes, men and women fell.

Meanwhile, a petition has been launched by students of Otorohanga High School calling on the Government to establish a commemorative day for New Zealanders to remember local civil battles.

Mr Morgan said New Zealand children knew about battles in Gallipoli and Afghanistan but little of the Battle of Rangiriri and the Battle of Orakau. He told Mr Key the Government should establish a commemorative day to remember the civil wars fought in Aotearoa between colonial troops and tangata whenua.