A political commentator says the Maori Party should get rid of its president, Pem Bird, if it wants to survive.

Both Labour and Mana say the party is on its way out after coming third in the Ikaroa-Rawhiti by-election. 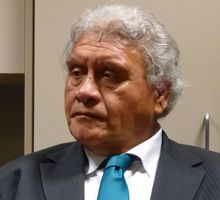 Maori Party co-leader Pita Sharples says a challenge to his leadership by MP Te Ururoa Flavell was partly to blame for the result.

Rawiri Taonui, from the Auckland University of Technology, is pointing the finger at the party president, Pem Bird, who he says should have sorted out the leadership by now.

He believes Mr Bird also poorly-handled the spilt with Hone Harawira and the party should look for a replacement.

Mr Taonui believes good possible candidates would be Naida Glavish of Te Runanga o Ngati Whatua, and Na Raihania, who stood for the party in the by-election.

But Pem Bird says he is not upset by the professor's comments.

He says the statements are being offered from the safety and privileged position of the sidelines.

Mr Bird says the leadership issue is on track to be sorted out - but the by-election came along out of the blue.

He says it would have been nice to have got the issue of the leadership challenge out of the way, but says the matter will be handled at the party's AGM later this month.