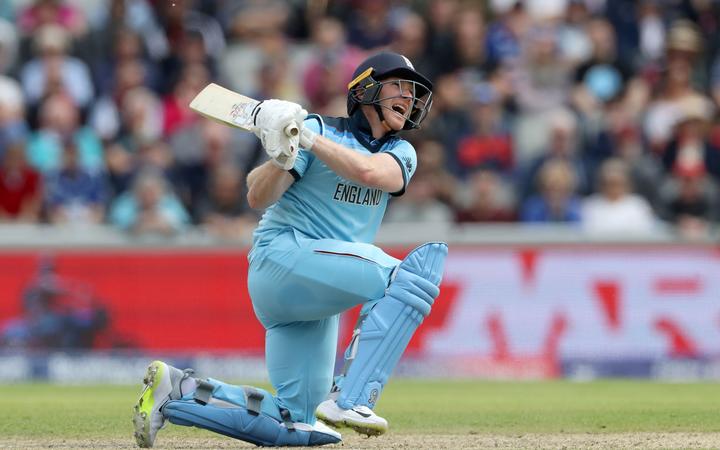 Batting fireworks were expected in the repeat of the 2016 final between the sides but England made it a one-sided affair with their bowlers running amok in Dubai.

Moeen Ali (2-17) wrecked the West Indies top order before Adil Rashid ran through rest of the line-up to skittle out the Caribbean side for a paltry 55 inside 15 overs.

England, bidding to become the first side to hold the 20-overs and 50-overs World Cup titles at the same time, chased down the target in 8.2 overs to begin their Super 12 campaign in style.

Morgan's men endured their own batting wobble in their chase losing four wickets in the process but their victory was never in doubt.

Earlier, wary of the evening dew that could make gripping the ball a challenge, Morgan opted to field and West Indies slumped to 37-5 inside eight overs with Moeen in the thick of things.

Stationed at mid-off, Moeen ran backwards chasing a skier from Evin Lewis and took a terrific running catch over his shoulder to draw first blood.

In the next over, Moeen, who bowled his four overs on the trot, had Lendl Simmons caught in the deep and the spinner returned to dismiss Shimron Hetmyer to jolt West Indies.

Rashid then ran through the bottom half of the West Indies line-up, dismissing Kieron Pollard and Obed McCoy off successive deliveries.

Rashid sent down 14 deliveries, conceded only two runs and claimed four wickets in a terrific display of spin bowling.