Halfback Faf de Klerk believes South Africa must return to the style of play that won them the 2019 Rugby World Cup if they are to defeat New Zealand in their Rugby Championship clash on Saturday, saying the desire to be more expansive has not worked. 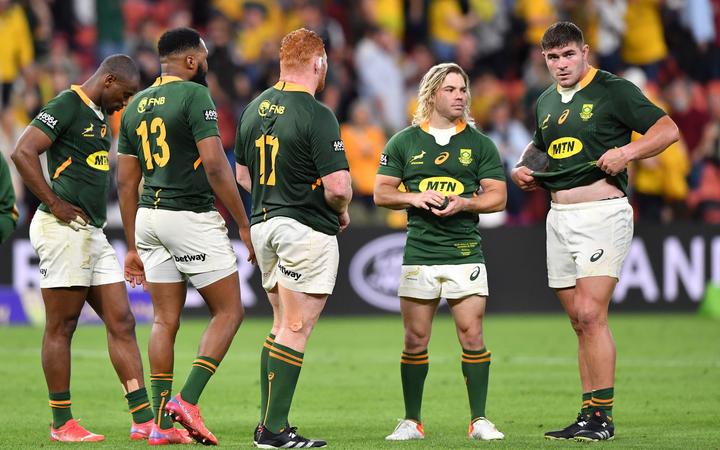 The All Blacks are favourites going into their penultimate match of the competition in Townsville and will lift the 2021 title if they get a bonus-point against the battered and bruised Springboks, who are coming off demoralising back-to-back losses to Australia.

Certainly in the second of those defeats, by 30-17 in Brisbane on Saturday, they moved away from their tactical kicking game, but committed an unusually high number of errors and looked flustered at times.

"We have strayed a bit away from how we normally play, our DNA, and that has maybe put the guys under pressure, forcing the errors, forcing guys to overplay a bit," De Klerk said.

"That is up to us, as game-drivers, to make sure we play in the right areas on the field, to not have a go when it is not really on. We know as a group we need to be better; we need to step up our game a lot going into this test and rectify those errors."

This will be the 100th fixture between the Boks and All Blacks since the first in 1921 and is likely to be a stark contrast in styles as New Zealand test the usually solid South African defence with their relentless runners.

"What we have seen from New Zealand is that they are very dangerous when you make mistakes. Their counter-attack is one of their big scoring methods," De Klerk said.

"We know that if we go on attack, to not make errors at all. If we give them knock-ons, we need to kill that ball because that is when they come alive.

"When we go to our kicking game and they get their off-loads going, they can be very dangerous, so we need to shut them down."

The Springboks have made a couple of changes to their side for the game with the experienced trio of Lood de Jager, Elton Jantjes and Frans Steyn returning to the matchday squad.

De Jager will start alongside Eben Etzebeth in the second row, while in the other change to the starting lineup loosie Kwagga Smith starts ahead of Franco Mostert.

The All Blacks team is named Thursday afternoon.