The Silver Ferns overcame their disrupted preparation to defeat the experienced England Roses 48-42 in game one of the Taini Jamison Trophy series in Christchurch. 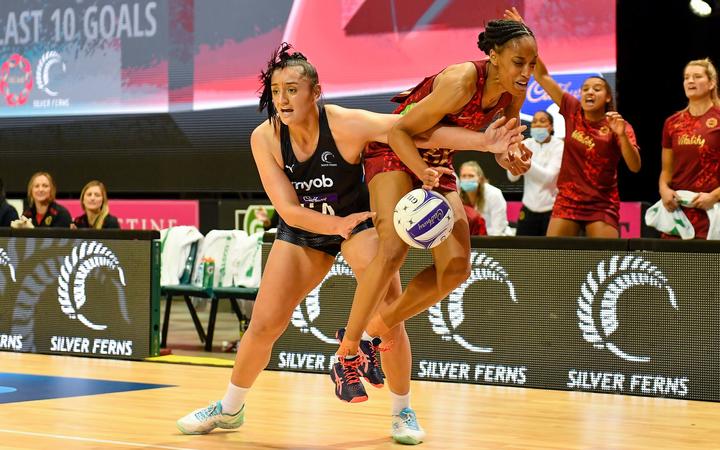 Tiana Metuarau did not look out of place in her first game for the Silver Ferns. Photo: PHOTOSPORT

Debutant Tiana Metuarau was a standout for the new look Silver Ferns as the 20-year-old goal attack did not miss in the first half.

Metuarau ended the game with 17 goals from 19 attempts at 89 percent.

The Silver Ferns had the advantage after the first quarter, leading 12-11.

The home side started the second quarter strongest, taking a five goal lead (26-21) into the half on a the back of an increased workload from goal shooter Maia Wilson.

Silver Ferns coach Dame Noeline Taurua made a raft of changes across the court after the main break as she tried to give her players court time and work on combinations.

England took advantage of the changes and kept the Silver Ferns to their lowest-scoring period of the game. The Roses closed the gap to four goals at end of the third quarter.

The introduction of England goal shooter George Fisher, who has played for the Southern Steel in the ANZ Premiership, helped to boost the visitors' accuracy, scoring 22 out of her 23 attempts.

The Roses scored the first three goals of the final quarter to briefly level the scores before the Silver Ferns went on a four-goal run of their own.

Under alert level 2, fans were not able to attend with only a small number of family and friends in the stands at Christchurch Arena.

Nweke and Toeava were not included in Monday's game day side.

Game two of the three game series is on Wednesday night in Christchurch.