Damian McKenzie will make his first test start at first-five for three years on Saturday as he takes over from last week's star performer Beauden Barrett. 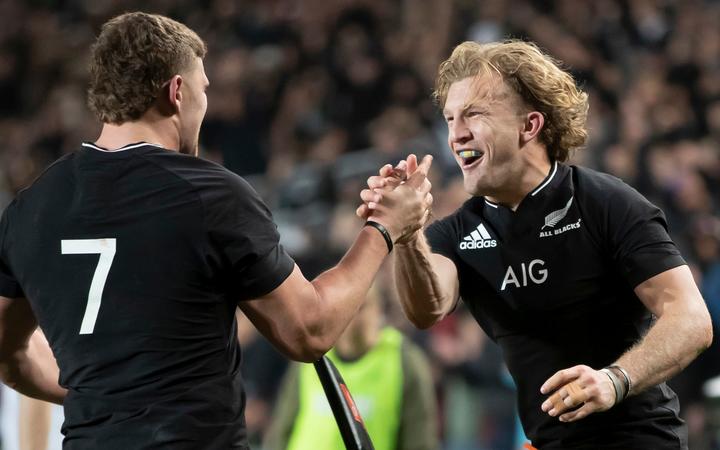 McKenzie will run on at 10 against Argentina in Brisbane with Barrett on the bench after All Blacks coach Ian Foster completely overhauled his team for their fourth Rugby Championship clash.

The fleet-footed playmaker has worn the All Blacks' number 10 jersey only once, in the 49-14 thrashing of France in Dunedin in 2018, though he came off the bench to replace Barrett during the 39-0 shutout of the Pumas last weekend.

With regular 10 Richie Mo'unga stuck in hotel quarantine for two weeks, Foster said McKenzie's promotion would help ease the load on Barrett with back-to-back tests against South Africa to come in consecutive weeks.

"He played 35 minutes last week against Argentina and he's got a clear understanding of his role," Foster said of McKenzie, who has played most of his 34 tests at fullback.

"It's a common sense selection in terms of managing Beaudie for the next couple of weeks. But it's also a vote of confidence that we think he's really progressing in that position."

"A great opportunity for myself to have a run around there.

"I've started at 10 before and then come off the bench in the 10 position for the All Blacks. It's a position I'm familiar with, played a bit there during Super Rugby (Chiefs) and have trained a bit over here in Aussie with Baz (Barrett) and I being the tens here.

"It's an exciting challenge and I'm really looking forward to it.

While McKenzie will lead a backline featuring only four of the players who started last week, the pack has been completely changed with Ardie Savea returning to captain the side from openside flanker after being rested last week.

He is joined in the back row by number eight Hoskins Sotutu and Ethan Blackadder as the All Blacks look to maintain their 100% record in the competition.

Lock Patrick Tuipulotu will partner Tupou Vaa'i in the second row after recovering from a groin strain, while Brodie Retallick, who captained the side on Sunday, has been rested.

Centre David Havili, loose forwards Akira Ioane and Dalton Papalii, and props Nepo Laulala and Karl Tu'inukuafe will also have the week off.

Loosehead prop Joe Moody, who eased back from injury from the bench on Sunday, will start in the front row with hooker Samisoni Taukei'aho and tighthead Tyrel Lomax.

"Five tests in a row demanded that," Foster said of the changes.

"But the good thing is that we have a group that has been focusing on the same opposition for the last two weeks, so our preparation time hasn't been compromised.

"We are expecting a huge response from Argentina, and we have to make sure we are prepared for that because we know what a wounded beast is like.

"The key is not so much how they respond, but how we respond. If we go into this test match thinking it's just going to happen for us like last week without earning the right to have the scoreboard in our favour, then we are in trouble."

Regular halfback Aaron Smith was ruled out of the Rugby Championship this week while awaiting the birth of his child, and Foster said he was not planning for the test centurion to play any part in the subsequent northern hemisphere tour.

The coach added that Shannon Frizell, who had assault charges dismissed this week, would come into selection considerations as the All Blacks head to the United States and Europe.