Two weeks ago, the relationship between New Zealand Rugby and Australia seemed to hit an all-time low. 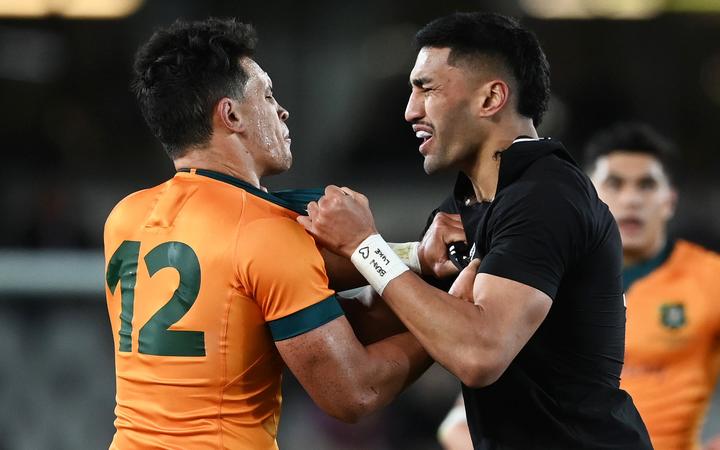 The All Blacks had chosen not to travel to Perth due to the uncertainty surrounding the Rugby Championship, a decision Rugby Australia described as "unilateral", with boss Andy Marinos essentially accusing his New Zealand Rugby counterpart Mark Robinson of deceit.

"It's incredibly disappointing to be informed of this decision via the media, despite having a conversation with the CEO moments before and there no mention that this was the intention," Marinos said in a statement after NZ Rugby announced it would not travel for the August 28 fixture.

"It's disappointing how it's been communicated. Our boys all found out through social media.

"NZ Rugby didn't even have the respect to consult RA about their decision, so that's hugely disappointing.

"I'm not sure 'shocked' is the right word, because I'm not surprised."

"I just feel there's only one of us who are interested in doing what's best for the game," Rennie added.

"We've all made sacrifices to ensure that the games are played for the financial benefit of everyone and the good of the game.

That anger has softened with the All Blacks in Perth preparing for the third and final Bledisloe Cup test, albeit a bit later than first planned.

However, for Rennie the resentment still simmers.

"The disappointment for us was we knew that the Rugby Championship was going to be played somewhere in the world on the 12th of September.

"The All Blacks committed to play us originally on the 21st [of August] and then the 28th and, had they come over here, what we knew was on the 29th we're all jumping on a plane heading to somewhere in the world.

"Whether that was Brisbane, South Africa or that was the UK and, from that perspective, we felt they should have been on the plane and come over and fulfilled their commitments.

"But anyway ... they're here now. I know there's a lot of people in Perth really excited."

The frosty relationship between the trans-Tasman rugby administrators will add fuel to a Wallabies fire, as they try and avoid a Bledisloe clean sweep.

"There's plenty of motivating factors and the biggest one is the scoreline last time we played."

However, the All Blacks first-five and vice-captain Beauden Barrett said any off-field animosity between administrators isn't a focus for his team.

"They (the Wallabies) may well use it as motivation, but we are not buying into that as players,'' Barrett said. "We have our own drivers, and focuses leading into this weekend.

"So if they want to lean on that, that is completely up to them. We understand it is going to be a physical, brutal game. As these test matches against Australia are. So will be expecting that.''

With Richie Mo'unga remaining home for the birth of his second child, Barrett is the squad's only first-five, and while he's only worn the All Blacks number 10 jersey twice in the last two years, he's confident he can do the job.

"If it eventuates it will be a great opportunity for me. There's no hiding the fact there are a few of our experienced boys at home as well. We're seeing that as an opportunity for a few of us to step up and take the lead in certain areas.

"I've been here before and that's something I can take a lot of trust and confidence from. With Richie not being there Damian [McKenzie] comes in as another No 10 option so we'll work together to drive this team - it's not just a one-person job.

"I'm happy to be back focusing on my play at first five-eighth and hopefully there will be plenty of opportunities in the next few weeks. We understand we're away for a while, but we're not looking any further than taking on the Wallabies this Sunday. They've been sitting here waiting for us for a few weeks now so we'll be ready to go."

The All Blacks have a new captain with Ardie Savea taking over from expectant father Sam Whitelock, who has also stayed in Aotearoa.

Savea, of Samoan heritage whose father hails from the village of Si'umu on the south coast of Upolu and his mother from the Eastern village of Lutuanu'u on the same island, became emotional when describing what the honour means to him and his family.

"And to be able to tell Mum and Dad was huge.

"Two people that migrated from Samoa to create a better life for their kids, yeah it's pretty crazy.

"To be here for them it's pretty special."

The game may also be marked by the return of Quade Cooper to the Wallabies after a four year absence.

In as injury cover, he might not get a chance to play again after this weekend, but despite the attention around whether he'll play in Perth, the Tokoroa raised playmaker is adamant he's no fazed.

"It hasn't been a focus of mine at all," he said when asked how much it would mean to him to play for the Wallabies again.

"It's not something that I've come in here going, 'Oh, I just have to play a test.' For me, coming in here has been about learning and the things I've been able to learn.

"Whether I go back to Japan after this game, whether it's after the Rugby Championship, I'm not 100 percent sure just yet.

"I have a wealth of knowledge in terms of footballing, in terms of things I've been able to gain and learn about myself and being back inside this environment.

"The level of skill, the level of training that we've been able to train at, I haven't had that for four years or something, since I was last inside a Wallabies squad.

"As I said, it hasn't been a focus of mine to come in and just play games. If I can grow as a man, grow as a rugby player, take that back to Japan and pass that knowledge onto other people, well then that's a great reward for myself.

"That's where my focus is at, and anything else outside of that, that's just bonuses along the way in this journey."

Cooper will return to Japan when his time with the Wallabies is up, he could leave a hero if he helps guide Australia to a win over the All Blacks.

Both teams for Sunday's third and final Bledisloe Cup test will be named this afternoon.