Two time winner Lisa Carrington has easily won her heat of the K1 200m kayak event to advance to Tuesday's semifinals at the Tokyo Olympics.

She also advanced directly to the semifinals of the K2 500 with Caitlin Regal after they comfortably won their heat.

Carrington told Sky that it had been reassuring to deliver a solid performance in the international arena at last.

"The nerves are still the same - it's been two years since we raced internationally so it was exciting to be out there," she said.

"I really wanted to know how the rest of the world was tracking, so it was cool to do just do what we did today."

Regal said the heat win was a good start, but she was confident there was more in the tank.

"We wanted to go out and show everyone the work we'd done. This is just the beginning for us - it's not unexpected, we've put in the hard yards and now it's about putting it all together."

However, fellow New Zealanders Alicia Hoskin and Teneale Hatton finished a distant fourth in their K2 500 heat and will have to contest the quarterfinals. 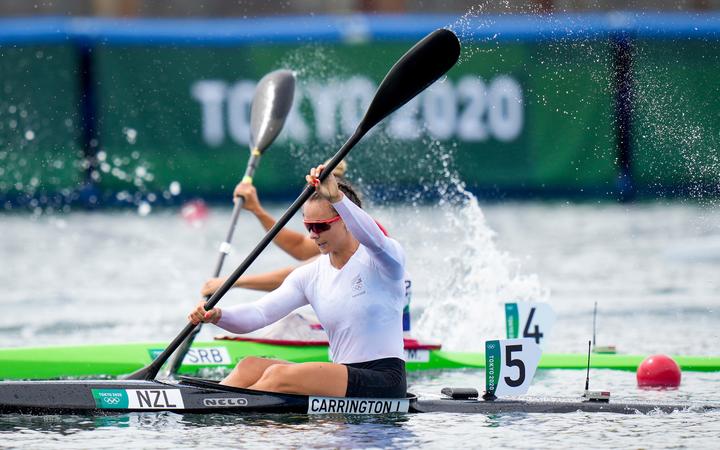 Lisa Carrington easily won her K1 200 heat to advance straight through to the semi-finals. Photo: Photosport

Carrington said after her K1 200m heat she wasn't focused on winning a hat-trick of medals in the event.

"I probably don't look at it like that. I just want to go out there and perform my best. We have been doing a lot of hard work in the last five years, so I just want to show the world what I can do and what we can do as a team."

She may will be the last K1 200m Olympic champion with the event being taken off the Paris 2024 schedule.

"It is such an awesome event that it is such a shame that it is leaving the Olympics. I am so privileged and fortunate to have done it."