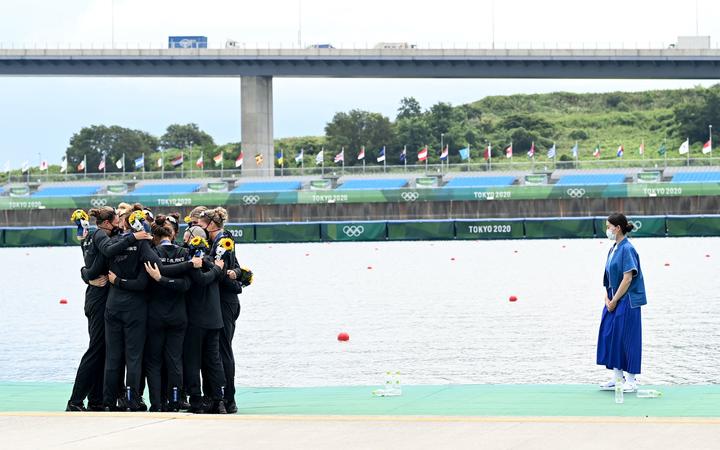 You pull on an oar as hard as you can for 2000m. You pull hard if you're in first place or last and when it gets painful, you keep pulling. When you get over the line, you stop.

There may be nuances and tactics and strategies, but out in amateur Olympic land we can't spot it. We like rowing's simplicity. Start. Pull. Finish.

And today it is our favourite sport. "A golden (and silver) hour" of TV, as TVNZ called it. Gold and silver and gold.

If anyone can explain the nuances it is Olympic double medalist Eric Murray on TVNZ's Olympic Games Tokyo 2020.

Eric Murray, the perfect rower's name. Everyone in rowing seems to come from regional New Zealand and have names like Emma and Rob and Eric and Hamish and Juliette. Good strong, no-nonsense, keep-to-your-lane names - like rowing.

Eric explains it all to an ebullient Toni Street and a smiling Wendy Petrie, as we await the singles scull with Emma Twigg.

Eric runs through the field helpfully; the Swiss and Austrian will go hard from the beginning. The Russian Hannah Prakatsen will be strong.

"If Emma wants to win this race, she has to beat every single one of the people in that race,' he tells it to us straight.

But don't worry about the first 500m, wait for the "ugly part" of the race, he tells viewers.

We wait. The 500m mark passes, the ugly part begins. 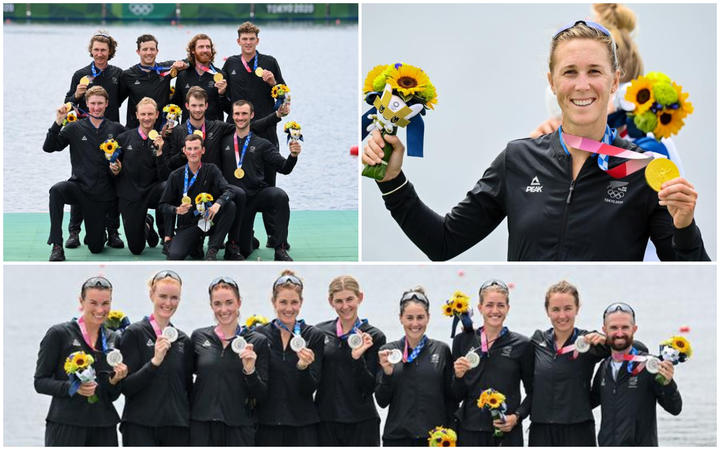 We like our Emma who seems to be able to row perfectly with a 10-mile stare down the course, as if admiring the bridge in the distance which always seems to have concrete trucks crossing it during races.

"If you are watching this is New Zealand, don't count your chickens before they hatch," says the English-sounding commentator. "Hannah Prakatsen has a kick."

But there's no need to worry about our Emma . She pulls steadily, po-faced, all the way through the "ugly part" which for us in couch-land seems to go on forever. Finally, finally, our Emma is home.

She wins. She smiles. She pulls on her oar to get the boat off the course; there's another race coming. Time waits for no-one on the Olympic rowing course.

We cross back to Eric, Wendy and Toni in the studio. Eric is excited. When he is pumped, he speaks in clipped, tight sentences.

"Emma did it through the middle. She kept pumping along. She gritted her teeth. There was no fade. Olympic champion."

Eric is in his element. He rattles off facts; the average age of a medalist in rowing is 30. Wendy blinks. She has a daughter who is going to the University of San Diego on a rowing scholarship. She is 17. Thirteen long years of being a rowing mother flash in front of Wendy.

Eric has the look of a man who has been good at rowing, is now good at golf and one day will wear Rodd and Gunn and take up skeet shooting. He will be good at it.

Then the women's eights are off. As Eric has been saying; the eight feels like country against country, while all other rowing races feel like individuals against other individuals.

The Canadians start strong, nail the ugly part of the race and lead all the way to the finish.

That doesn't stop the Sky commentator from ratcheting up the volume of words. The last 500m goes something like this. "China on the charge. Americans on the charge. Hunting down the Kiwis. Canada fading. Everyone charging. The US fading. That is an awful lot of ground to catch up for the Kiwis. Here come the Kiwis. Have the Canadians done enough? You never know. Yes, they have. Canada. Kiwis. China."

Gold one, silver one.

Back to the studio. 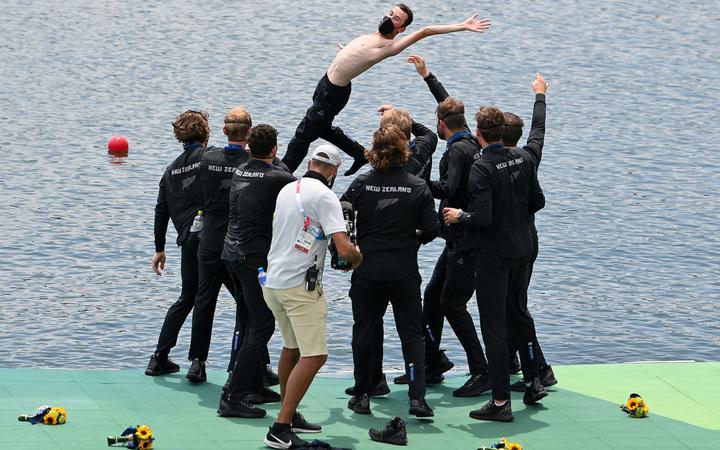 In couch-land we are trying to juggle our emotions; gold then silver. Is this a comedown? Eric is stern with us. This was a great result. It is New Zealand's first medal in the women's eight. We fall into line.

This is a man who knows glory (two Olympic golds, eight World Championship golds, two world records). He also knows defeat (last by miles in his first row for Mercer Rowing Club's novice fours). And if he is counting this as a great medal, who are we to disagree?

Then, with no time to recover, it is the men's eight final.

A generation of Kiwis grew up on the eights. We won gold at Munich in 1972. The race was replayed for weeks and weeks on New Zealand's sole TV channel. In 1976, we won bronze. Then...nothing.

In the boat is Eric's old boatmate, Hamish Bond.

Germany hits the front and the commentary kicks off: "The New Zealanders charge. The British are having a better row than they did ... Will the British break Kiwi hearts? Are the Germans out of it? Look at the Kiwis, Andy. Look at that. Britain looks they are standing still. Where has New Zealand found this extra pace? At 1500m it is New Zealand's to lose. New Zealand have turned on the after burners. What a crew this is. Great Britain are coming. Where have they found the pace from? Hamish Bond digging it in ... And New Zealand will win - 1972 was the last time they won. They will write a new chapter in New Zealand history."

In amateur Olympic couch-land we are breathless. We are in shock. Back in the studio they are all breathless. Toni exhales.

It is Eric we need to put it all together for us. Eric knows rowing. He knows Hamish Bond. His father-in-law was in the famous 1972 eight.

"That was amazing," says Eric. In couch-land, we couldn't agree more.

"That was textbook racing. They stayed with the other crews at the start. Then when they could, they put their nose in front.

Such a straightforward sport, rowing, and a golden one, too.