All eyes are on the rowing at the Tokyo Olympics today, but going under the radar is the sailing regatta, with a squad of New Zealand sailors taking part.

We thought it was time for a catch-up. 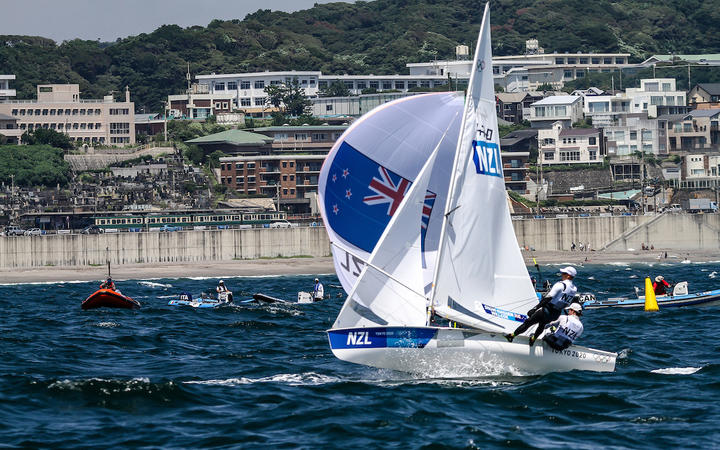 Where is everyone placed

New Zealand is taking part across a number of categories. As at the end of yesterday's racing, this is where everyone was placed.

Our 49er FX Women's team of Alex Maloney and Molly Meech were ninth after six of 13 races.

Paul Snow-Hansen and Dan Willcox were sitting at fifth in the 470 Mens after four of their 13 races.

Placed seventh in the Finn class was Josh Junior after six of 11 races.

The Nacra 17 team of Micah Wilkinson and Erica Dawson were in 12th after six races of their 13.

And Sam Meech was 14th in the Men's Laser after eight races.

Who is in action today?

It is a big day on the water.

RNZ's First Up asked Matt Stevens, Yachting New Zealand coach and partner of Erica Dawson who is in Japan competing in the mixed Nacra.

First Up: So how have Peter Burling and Blair Tuke adapted from going from multi-million dollar America's Cup yachts to 49ers.

Matt: "They are so experienced in the 49er class. They have won something like six world championships in the 49ers. For them, it's like riding a bike. We have had a slow start for the regatta but I wouldn't be surprised to see them move to the top of the leader board or close to it in the next day or two."

First Up: What are the conditions like? We have seen some swells in things like the surfing?

Matt: "The teams have spent a lot of time at the venue in Japan in 2019, so they are familiar with it. It has probably been a bit windier than average for this time of year. But things will change again. It is tending now towards an offshore breeze, rather than the onshore breeze that we have had.So we will start to see a different type of racing."

First Up: How is Erica's leg. We know that she fractured her fibula in training in Australia this year. (Erica's trapeze wire snapped and she hit the boat's rudder

Matt: "They were training at Mooloolaba in Queensland and we got the news it was broken. And it was not a good break. It was devastating. We quickly found it was the same break suffered by Waisaki Naholo (the All Black who recovered from the break to play in the Rugby World Cup in 2015). We talked to the doctors. And to be honest, Erica has done everything she could to be fit and ready for this Olympics."