New Zealand sailors continue to have their issues at the Olympic regatta at Enoshima. 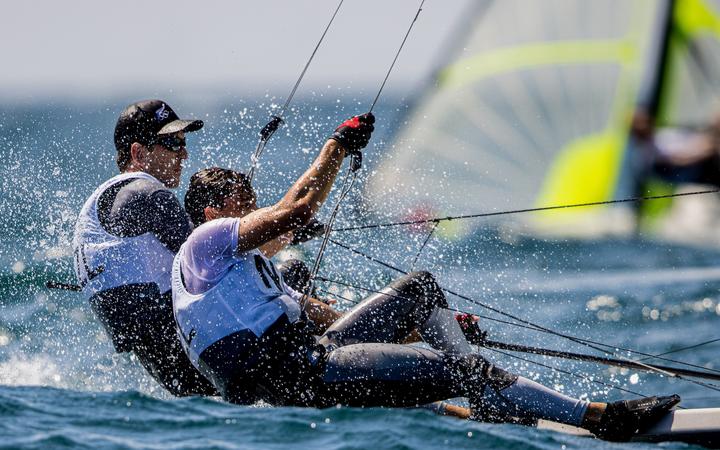 It was a very nearly day for many of the New Zealand crews but a number of them are still in medal contention heading into the business end of the regatta.

defending 49er champions Peter Burling and Blair Tuke are fourth overall, only eight points off the lead, but could have made significant progress up the standings save for a costly error when Burling fell off the boat through a manoeuvre.

Sam Meech was also having a great day, finishing second in his first race before capsizing when he got his leg stuck under the hiking strap when contesting the lead in his second. The Rio bronze medallist has had a frustrating regatta to date and now sits 14th overall in the Laser with two more qualifying races before the top-10 medal race.

And the men's 470 of Paul Snow-Hansen and Dan Willcox faced a late protest from the Spanish crew after provisionally ending the day in fifth overall, only one point behind third.

Josh Junior is hanging in there in the Finn and will go into the rest day in seventh while Alex Maloney and Molly Meech will return to action tomorrow in the 49erFX in ninth after a rest day today.

Micah Wilkinson and Erica Dawson are 12th in the Nacra 17 but are expected to climb in the standings when the wind drops over the next couple of days.

Burling and Tuke made an uncharacteristic error in their first race when Burling fell off the boat through a tack near the top mark. The pair had been sitting in second at the time and did well to quickly recover and finish 12th to limit the damage.

They followed that up with a second in their next race, despite a poor start, and feel ready to attack the last half of the regatta.

"We are still well within touch but it's been a little bit frustrating over the last couple of days," Tuke said. "The positives out of that is that we are making mistakes and are still there or there abouts."

Burling added: "It was a little bit frustrating not to put two really low ones on the board but everyone seemed to have a bit of an up and down one today. It would be nicer to be a bit closer to the front but we're looking forward to the next six races."

Junior is looking forward to a rest day in the punishing Finn class. The 31-year-old hasn't quite found the form that won him the 2019 world title and knows he needs to string it together in his final four qualifying races.

"I need to sail to my potential, sail a bit faster, smarter and sail cleaner races," he said. "I think it's a bit of everything but it's all achievable.

"The rest day is great timing. I'll reset and hopefully attack the second half of the regatta."

It could look quite different in terms of conditions, with the moderate winds and wavy conditions giving way to lighter sea breezes.

It's the sort of conditions Snow-Hansen and Willcox are looking forward to, with the 470 European champions hoping for a range of wind strengths across their 10 qualifying races to mix up the fleet.

The Australian pair of Matt Belcher and Will Ryan banked two wins today to extend their lead at the top but it's extremely tight among the rest of the top 10.

"It felt like a day where we could have got more but we could have also clocked up a lot of points so I guess we just have to be happy," Snow-Hansen said before facing the protest. "We are very much in it and it's exciting."