The four-legged members of New Zealand's Olympic team have been settling into their air-conditioned stables in Tokyo ahead of competition. 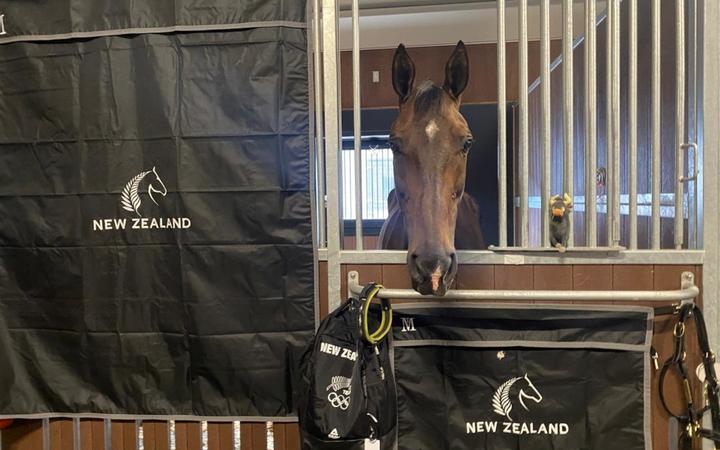 The horses had settled in well into the stables - helped by their relaxed personalities, a team groom said. Photo: RNZ / Maja Burry

Eight horses have been flown to the Games to join the six New Zealand riders in the eventing and showjumping teams.

Equestrian Sports New Zealand performance manager Jock Paget, who is in Tokyo, said the animals were treated like "super athletes" and support staff were in place to care for them during the Games.

That included grooms, a New Zealand team vet, a farrier and a physiotherapist.

"They have their own travelling physio, they get acupuncture, a farrier to check on their feet and do their feet."

"The grooms are highly skilled people and they know the horses inside out and are constantly monitoring them." The horses get their temperature checked twice a day, he said.

Paget was an Olympic bronze medallist in London 2012. He said the Tokyo 2020 team was capable of medals and that's what they were hoping to see.

Miles said the New Zealand horses had settled in well into the stables - helped by their relaxed personalities.

"They're all just pretty chilled out, they've got nice personalities, so lucky for us, us grooms don't have a hard job this week looking after any naughty horses. "

The New Zealand eventing team will be the first in action, dressage gets underway on Friday.

Husband and wife Tim and Jonelle Price will be joined by Games debutant Jesse Campbell.

Campbell will be riding 10-year old Diachello and was excited to see what they could achieve together.

"Dichello's really come through and he's done incredibly well and I think he's the perfect sort of championship horse, he's pretty level temperamented and very good at all three phases."

New Zealand will also be represented by a show jumping team at Tokyo, their first day of competition is 3 August.