Minjee Lee of Australia stunned third-round leader Jeongeun Lee of South Korea in a playoff Sunday to win the Evian Championship in France. 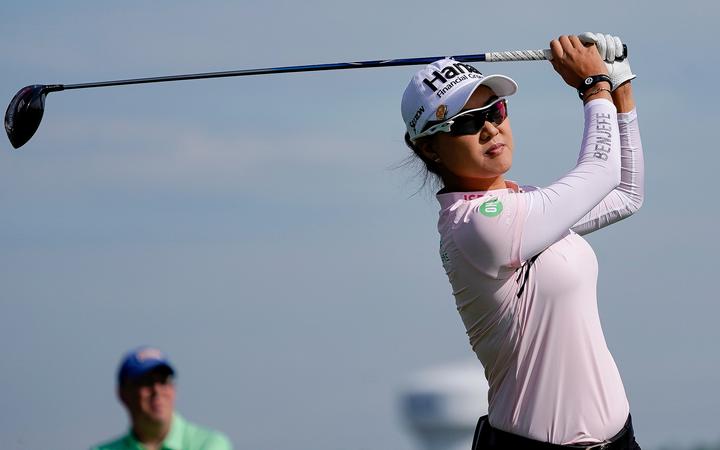 It's the sixth career win for the 25-year-old Australia Lee and her first major, making her the ninth consecutive first-time winner at LPGA majors.

New Zealand's Lydia Ko carded a final round one under par 70 to finish tied for sixth on 13 under in total, five shots behind Lee and Lee6.

Jeongeun Lee, known as Lee6 to differentiate from other golfers of the same name, entered the day with a five-stroke lead, buoyed by a historic round in which she shot a 10-under 61 to tie the record for low round at a major.

Her 36-hole total of 127, good for 15-under par, was also a record for two rounds in a men's or women's major championship, breaking the 128 shot by Brooks Koepka at the 2019 PGA Championship.

But Lee, who started the day tied for fourth seven strokes behind Lee6, picked up seven birdies in a bogey-free round to force the playoff at Evian Resort Golf Club in Evian-les-Bains.

In the one-hole playoff, played on No. 18, Lee hit her second shot to within eight feet of the cup. Lee6's second shot ended up in the water, forcing her to take a penalty drop.

Lee6 finished the hole in six strokes, giving Lee three chances to putt out for the victory.

Lee sank the second putt to earn her first win since 2019.

"I never really thought about it when I was playing," said Lee of the seven-stroke deficit to start the day. "I just tried to make as many birdies as I could ... I think I saw the leaderboard maybe once or twice."

Lee6, 25, had five bogeys and five birdies to finish regulation play at even-par 71. All five bogeys came on the last seven holes of the front nine.

The winner of the U.S. Women's Open in 2019, Lee6 was seeking her second career LPGA title.

Lee was the seventh woman since 2007 to lead by at least five strokes heading into the final round of a major. All six of the previous players in that position went on to win.

American teen Yealimi Noh, who started Sunday's round in second place at 13-under, had five birdies and one bogey to narrowly miss the playoff.

Japan's Ayaka Furue shot 4-under 67 to finish in fourth place at 15 under, while Thailand's Atthaya Thitkul shot 6-under 65 to round out the top five at 14 under.

Tour rookie Leona Maguire of Ireland finished in a tie for sixth at 13 under after tying the major record with a 10-under 61 on Sunday. She birdied the last four holes to match the mark shared by Lee6 on Friday and Hyo Joo Kim at the 2014 Evian.

Defending champ Jin Young Ko finished in a tie for 60th at 2 over after carding a 2-under 69 in the closing round.